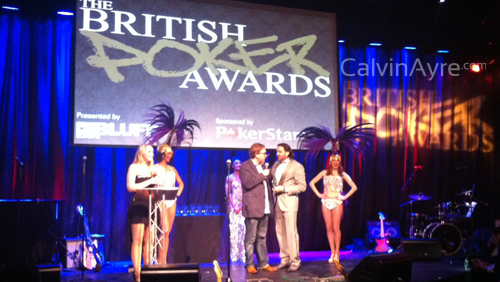 To celebrate the enormous success of the poker industry in the UK, the fourth British Poker Awards took place on March 3rd, 2014 at London’s Hippodrome Casino.

The event went off as a success with a packed house and a number of poker celebrities in attendance such as Liv Boree, Sam Trickett, Neil Channing, Barny Boatman, Sam Grafton, Victoria Coren and several other poker legends, proof that the Awards have become a staple in the British poker pro circuit.

It truly is amazing that such a small part of the world can produce so much success in a global sport such as poker and celebrating this success was in full force throughout the evening.

Some insider highlights from the night include when Sam Trickett accidentally spilled the beans on stage about his “Best Live Tournament Player” award before it was announced, when Tony Kendall missed the initial announcement of his award because he was outside listening to Neil Channing tell a long story and when Liv Boree said she was going to keep Daniel Negreanu’s award for “Best International Player” after she accepted it on his behalf.

Looking back on the night, everyone had a great time and congratulations to all the very well deserving award recipients.

Performance of the Year: Barny Boatman

Player of the Year: Alexander Millar