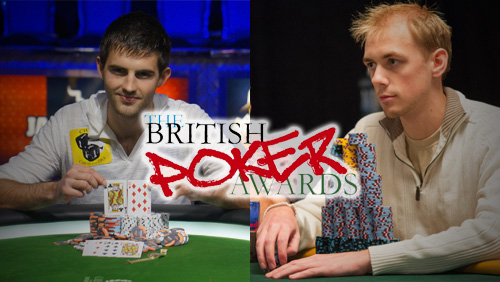 The British Poker Awards is fast approaching and all this week Lee Davy will be giving us the lowdown on who he believes will walk away with the awards.

The fourth annual British Poker Awards are going to be held at he Hippodrome Casino, Leicester Square, on Monday 3rd March 2014 and there are 18 awards all containing spit and polish.

CalvinAyre are going to have a presence at the event, so keep your eyes peeled for some wonderful winner interviews, and in the meantime I am going to see how good I can be a predicting some of the winners.

Here is my analysis of the Reader’s Choice: Best Live Tournament Player

I am going to follow the Neil Channing school of thought by producing my tips and that means I am going to start by cutting out those I don’t believe are good value for the win.

Sam Trickett won more money than anyone else on that list, during 2013, but over $2m of it came in the A$250,000 Aussie Million Challenge right at the beginning of the year. A runner-up spot at the PartyPoker Premier League followed, but then not much else, so Trickett won’t be taking this award in my opinion.

Another great player who can be scratched off this list is Matt Perrins. His second World Series of Poker (WSOP) bracelet in the $5,000 No-Limit Hold’em event, where he earned close to $800,000, was something special, but one victory does not constitute enough points for a tournament player of the year award – not in my opinion anyway. Sorry Pez but this year is not going to be your year.

Toby Lewis made the final table of two decent competitions when he finished sixth at the $10,000 World Poker Tour (WPT) World Championships, and fifth at the €25,500 High Roller at the European Poker Tour (EPT) Grand Final. Two great performances, but no victories mean that I am going to be dropping the IveyPoker pro from this list.

David Vamplew makes the list because of two outstanding performances at the WSOP where he finished runner-up in two bracelets events for a combined total income of close to $800,000. He makes my cut for a shortlist of three, but just didn’t do enough away from the WSOP to be able to make a real challenge for this one.

The live tournament player of the year will be a contest between Stephen Chidwick and Matt Ashton. Chidwick won the UK Player of the Year award at the Global Poker Index (GPI) European Poker Awards, meaning that on paper he was the most consistent live tournament player in 2013. He came away from the WSOP with a profit despite being one of the hardest working players at the event, and followed that up with some decent European scores.

Ashton was a revelation in 2013 and I for one found it surprising that he didn’t win the Rookie of the Year award at the GPI European Poker Awards where the panel handed the trophy to the young Spaniard Adrian Mateos Diaz.

Ashton won the $50,000 Poker Players Championship at the WSOP for $1.7m, and made three other final tables. Had he managed to hold on to his WSOP Player of the Year lead he would be a shoe-in for this award, but Daniel Negreanu would have done some damage with that great showing in Paris.

So who will it be?

I think the power of the WSOP will be the main factor here. My vote would go to Chidwick for his sheer consistency over every type of poker throughout the world, but I think the public’s memories will contain some exciting stuff all centered on Ashton’s WSOP Player of the Year race and I think this will give him the edge in the voting.

So my money is on Matt Ashton.

Calling the Clock: Acronym Time With News From the BPA’s, ACF, PPA and the CPAC
Lee Davy
27 February 2015