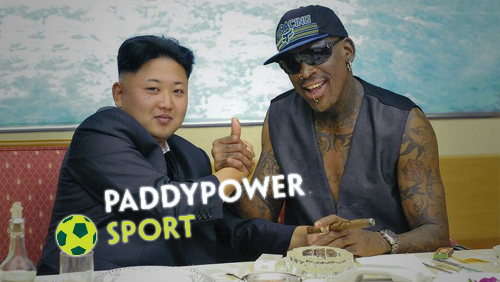 Have Paddy Power gone a step too far with their North Korean joke, after the Associated Press run a series of stories suggesting that the Irish funsters, and Dennis Rodman, may have broken UN Export Sanctions, and US Treasury Laws, by giving the North Korean leader birthday gifts.

The wheels on the Paddy Power/Dennis Rodman/North Korea bus keep on turning with news coming out of the weekend press suggesting that the Irish Bookmaker, and the former NBA Basketball star, may be in hot water over birthday gifts that were handed to the North Korean leader Kim Jong-un. 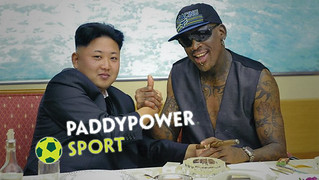 In October 2006, the North Koreans angered the European Union by moving ahead with its planned nuclear testing. The result was the imposition of UN Security Resolution 1718, which banned a list of ‘luxury goods’ for export to North Korea. US Treasury Law also forbids the export of luxury goods into North Korea either directly, or indirectly, meaning even if Rodman had given the gifts on behalf of Paddy Power he could still be facing the Beak.

The noise surrounds a game of pass the parcel that saw Kim Jong-un receiving an Irish whiskey set for his 31st birthday during the high profile visit to the state back in mid-December.

Paddy Power have issued a statement to NK News, a website based in South Korea, confirming that it did send the presents but was ‘satisfied’ that it had not broken any sanctions.

“The whiskey set consisted of a bottle of Jameson, a decanter and two glasses … I can confirm that we didn’t buy anything else for Dennis to give to Kim.” A Paddy Power spokesperson was quoted as saying in the Telegraph this weekend.

Dennis Halpin, a former US consul to Busan, chirped in to say he believes the gifts were in excess of £6,000 and included European crystal, Italian Suits and a Mulberry handbag; Paddy Power have denied these claims.

Rodman Blames it on the Booze

It seems karma is biting Rodman on his ass, as he has also angered his fellow countrymen after making comments with respect to imprisoned American Kenneth Bae, who was sentenced to 15 years’ labor in a North Korean prison back in Nov 2012.

Stick to the basketball Dennis.

“I want to apologize first to Kenneth Bae’s family. At this point I should know better than to make political statements. I’m truly sorry. I take full responsibility for my actions. It had been a very stressful day. Some of my teammates were leaving because of pressure from their families and business associates. My dreams of basketball diplomacy were quickly falling apart. I had been drinking. It’s not an excuse but by the time the interview happened I was upset.”

The quick turnaround came after Bae’s sister, Terri Chung, slammed Rodman’s comments and suggested that he may have harmed Bae’s chances of freedom.

“He is playing games with my brother’s life. He is clearly uninformed about Kenneth’s case, and he is certainly not in any position to pass judgment.” Chung told the Telegraph.

The Teletubbies Are the Cure

We all know that the North Korean leader needs to take a chill pill, and the UK Foreign Secretary, William Hague, believes he has the answer: The Teletubbies.

Hague has revealed that BBC Worldwide is negotiating with the North Korean television companies to provide them with programs such as Doctor Who, Eastenders, The Good Life and Tinky-Winky, Dipsy, Laa-Laa and Po, in a bid to expose the North Koreans to the life that we lead in the West.

“I have always believed that what brought down the Berlin Wall was not highbrow diplomacy but Dallas and Dynasty.” A senior Foreign and Commonwealth Office source told The Sunday Times.

Now we are expecting psychedelic alien toys to prevent a nuclear war.

“You couldn’t send Dad’s Army as it is about war.” Said the Foreign Affairs Committee Chairman, Sir Richard Ottaway.

I guess Tenko, Bridge Over the River Kwai and The Railwayman are also out of the question.

Kim John Un successor odds: Who steps up if he falls down?
Derek Tonin
30 April 2020