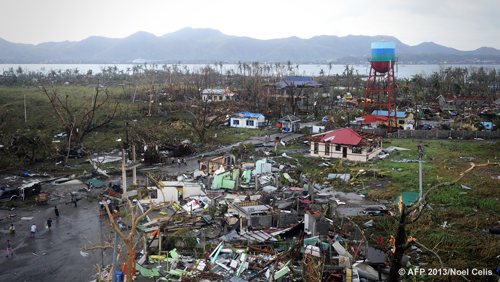 On Friday, Super Typhoon Haiyan, known locally as Yolanda slammed into the central islands of the Philippines shredding a path of destruction as it whipped its way through the country.

Packing winds topping 313 KPH (195 MPH), Haiyan is the one of strongest cyclones to ever make landfall.  The province of Leyte and the islands’ largest city, Tacloban, bore the full force of the record setting winds.

Buildings were destroyed, trees were toppled, ships ran aground and sadly many lives were lost. Chief Superintendent Elmer Soria told reporters that the initial government estimates have the death toll close to 10,000 people in the province of Leyte alone.

The gambling community has been lucky, the storm passed through the capital region without any adverse affects on the operations of the companies that make Manila their home.

It will be some time before the full effects of this incredibly destructive storm are realized. Currently, the Philippine government is working hard to bring water and food to the people and to restore power and communications to the islands but the government doesn’t have the resources to handle such a massive project on it’s own.

In times of crisis, the gambling industry has been very generous when it comes to donating to charity and relief efforts. We saw it after the earthquake in Haiti and after the massive monsoons that left 50% of the Philippines capital region flooded a year ago.

We’re calling on the gambling industry to once again lend their support to the country that is the hub of the Asian online gambling industry. It’s time that we come together and give what we can to help the good people of the Philippines.

Please donate what you can.