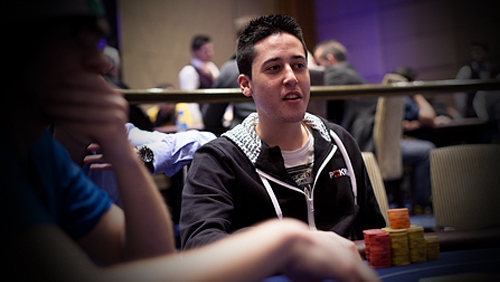 A Spaniard leads but you can’t help think that Germany and France are going to have a big say in where the title ends up at the end of the day.

Adrian Mateos has a big chip lead after crushing the field on the penultimate day of action, and he will be hoping that the heater continues as the pinch starts to take hold.

There is a million euros up top and Dominik Nitsche, Benny Spindler, Ravi Raghavan and Fabrice Soulier all know the route after taking down European Poker Tour, World Poker Tour and World Series of Poker titles in the past.

It’s going to be an amazing final table, but in the meantime let’s take a look at how they got there.

The chip leader really got out of the gates quickly after eliminating both Ludovic Lacay and Jordan Cristos to extend his lead at the top.

It was AQ v KK against Lacay, with an ace on the flop doing the damage, and then he found pocket aces to dispatch Cristos and the rather meager looking jack-nine off suit.

Fabrice Soulier would find pocket kings to eliminate the pocket sixes of Roman Romanovskiy, and Ivan Tikhov would dispatch Hans Martin Vogt to the rail when his pocket aces hammered pocket jacks.

Adrian Mateos may have been eliminating people for fun, but Dominik Nitsche gave him a timely reminder that he was still a force to be reckoned with after eliminating Ariel Celestino. It was ace-deuce for Nitsche against pocket kings, and an ace on the flop pushed the German into second place.

JeremyAusmus eliminated Mark Teltscher: JJ v AK and then suffered the same fate at the hands of Adrian Mateos in the following hand.

Then to finish off the level Daniel Steinberg eliminated Flavien Guenan AK v A2, and Ogjnen Sekularac bit the dust when his ace-nine failed to find the help it needed against the pocket jacks of Jerome Huge.

It was a case of unlucky 13 for Adrien Allain as he ran ace-nine into the pocket jacks of Adrian Mateos to hit the rail; Sergio Aido quickly followed when he found himself all in A3 v the 98hh of Jerome Huge; the latter hitting runner-runner straight to send the Spaniard spinning out of the contest.

Ivan Tikhov met a red hot Dominik Nitsche when his pocket queens yielded to pocket aces, and Fabrice Soulier found a piece of luck when his pocket fours hit a four on the turn to eliminate the pocket nines of Romain Kazarian.