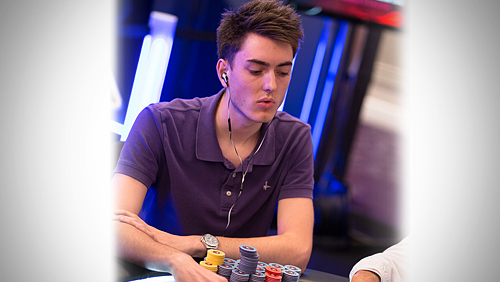 Robert Bull defeats a stellar final table to take the £113,405 first prize as the UKIPT Main Event comes to a close during the London Poker Festival.

Scottish poker is on the rise as Robbie Bull becomes the third consecutive Scot to take a UKIPT title after his victory in London, fresh off the back of Ludovic Geilich’s victory in Marbella (he owns a kilt I promise) and Alan Gold’s victory in Galway.

Sweet jesus. Dream final table. Everything went my way. Can’t think straight right now. Thanks for all the support and messages ya legends.

The victory was made sweeter in the knowledge that Bull had already let one UKIPT title slip through his grasp when he had to settle for third place in the £700 Main Event in Bristol last year.

The quality of the UKIPT London event turned supernova after the amalgamation with the European Poker Tour, as the main event player’s flick in the £1k whilst waiting for their true goal to begin.

That belief was never better demonstrated than the line up that greeted Bull and the rest of the table when the battle begun yesterday.

Paul Zimbler was the first person eliminated after missing the first 30-minutes of action stuck in traffic. He finally made his move with [Ah] [Kh] and found a caller in the shape of Karl Mahrenholz holding [Qc] [Jc]. A queen on the flop sending Zimbler back into the madness from which he had just arrived.

Ian Simpson achieved notoriety after he proposed to his fiancée just moments after winning the 2013 Irish Open, and he was soon in the chip lead after eliminating Patryk Slusarek AQ v KT. Jack Salter followed that up by eliminating Mahrenholz AQ v 88, and not to be outdone Simpson was at it again when he clipped the wings of Dario Sammartino JJ v A9.

Next it was Bull’s turn to get the cards he needed to make an impact.

He would be responsible for the elimination of Lasse Frost, when he completed his flush draw on the turn to beat the top pair of his opponent when the duo played for stacks, before Ian Simpson eliminated Jack Salter when he caught a straight on the turn to out rank the top pair of the man who started the day with the chip lead.

Heads Up For the Title

The messiness of the fourth and third place eliminations meant Ian Simpson took a 7.8m v 6.9m chip lead into heads up action against the Scot. There wasn’t much in it, and so it was no surprise that the pair agreed a deal that saw Simpson take £106,869 and Bull take £103,405 leaving £10k to play for.

If Bull prayed for the poker gods to be on his side they heard him. Simpson had his opponent on the ropes twice, only for the deck to come to Bull’s rescue. The first time the pair got it in Simpson was a slight favorite to take the title with A8 v JT, only for a Jack on the flop to hand Bull the chip lead.

Then in the final hand of the tie, Simpson was looking likely to turn the tide back into his favor when he was all-in holding [As] [8s] against the [Ac] [4d] of Bull. The flop of [Qd] [Jd] [6s] giving Bull a backdoor flush draw to add to his three outs, and it would duly arrive when the [Ad] on the turn, and [8d] on the river handed Bull the title, and biggest win of his career.