What would you do if you won over a million dollars playing poker on an online poker site only to see the Department of Justice (DOJ) seize every penny of it? 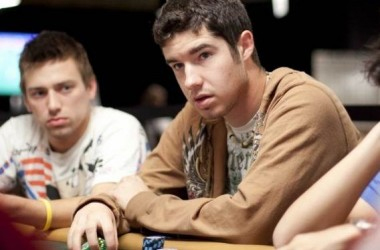 That’s exactly what happened to Blair ‘blur5f6’ Hinkle when in February 2011 he won the first-ever million dollar prize dished out on Full Tilt Poker (FTP), by capturing the $1,162,949.74 first prize in the FTOPS XIX Main Event, only to walk straight into the bedlam of Black Friday.

Hinkle has still not seen a single penny of that money, but after winning the Seminole Hard Rock Poker Open $10 Million Guarantee Championship Event, for $1,745,245, Hinkle can relax in the knowledge that another seven figure score has set him up nicely for the next few years.

The final table started with the short stack being eliminated first. Greg Lehn staking his tournament life on [Kd] [Jd] only to run into Justin Bonomo and [Ad] [Qs]. Lehn was out and there was nothing separating Bonomo and Hinkle at the top of the counts.

Racing out of the door right behind Lehn was the Spaniard Samuel Bernabeu Guilabert, and once again it was Bonomo holding the axe. Pocket deuces nowhere near strong enough to tangle with the pocket queens of Bonomo, and just like that we were down to four players.

Ray Qartomy took fourth place for $639,925 and this time it was Hinkle giving Bonomo a rest in the elimination department. Qartomy moving all-in with pocket sevens and Hinkle made the call with [Kd] [Qs], a queen on the flop and turn making trips for Hinkle and Qartomy was out.

Three-handed action ended in the blink of an eye. Only six hands were played before the short stacked Mukul Pahuja moved all-in holding [Ks] [Ts] only to find Bonomo calling and holding [Ah] [Th]. Five community cards later and Bonomo was facing Hinkle heads-up for the title.

The action was brutal and it took 223 hands spread over six hours of play to separate the two classy acts. Bonomo check raising all-in on a board of [Qd] [9s] [5c] [Jc], holding just top pair, and Hinkle delighted to be calling with [Ks] [Th] for the nuts.

Congratulations to Hinkle who takes his second seven figure score of his career; Bonomo does likewise with his second place finish.