After New Jersey’s Division of Gaming Enforcement (DGE) revealed that 37 companies had submitted applications to be a part of the new online gambling environment, the London-listed 888-Holdings have announced plans to launch within the state under its own brand name. 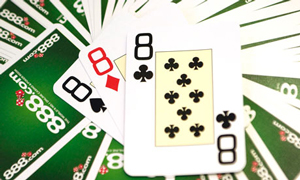 888’s access into the New Jersey market comes about as a result of their relationship with Caesars Interactive Entertainment (CIE), a romance that dates back to 2011 and sees 888.com as the official sponsor of the World of Series of Poker Europe (WSOPE) brand.

Press the rewind button on the VHS player of life and one would have assumed that Nevada would have been the first place that 888-Holdings would have reared its very experienced head. The Nevada Gaming Commission (NGC) granted 888 a license to operate in the state as a Interactive Gaming Service Provider, and the companies CEO, Brian Mattingley, told the Las Vegas Review Journal that ‘888 had chosen Nevada as its first U.S market.”

Station Casinos were the first to get out of the starting blocks when Ultimate Poker was launched at the end of April, but when the World Series of Poker (WSOP) rolled into town in May a very strong marketing campaign was held in the halls of the Rio to get as many players as possible to sign up for the imminent release of the WSOP online poker brand. A brand that is powered by the 888 software that has proven to be so successful in Europe.

But the WSOP has been and gone and there are still no signs of WSOP online poker hitting the Internet anytime soon. With their relationship with Treasure Island also standing still, it seems that Mattingley may have got it wrong, and New Jersey could be the birthplace of the triumphant return of a company that fled these shores after being sliced and diced by the Unlawful Internet Gambling Enforcement Act (UIGEA) in 2006.

“We are extremely well positioned in the U.S and are working with the regulators in Nevada, Delaware and New Jersey as these three states become ready to open,” said Mattingley in a statement.

The new poker room, and online casino, will be part of the All American Poker Network (AAPM), the joint venture established between 888-Holdings and Avenue Capital Group (AVG) at the same time 888 were receiving their Nevada state license.

One man who won’t be part of the 888 crew in Paris will be the long-serving Director of Poker Gareth Davies. According to breaking news from eGaming review, Davies has resigned from his post after seven years in charge.  It was Davies who was instrumental in much of the Stateside wheelings and dealings, signed the sports stars Shane Warne and Georges St-Pierre and also helped engineer the relationship with the WSOPE owners CIE. His replacement has not yet been announced.