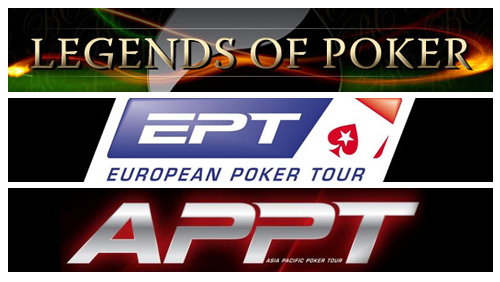 August. Assuming you’re from the Northern Hemisphere, just seeing of the word probably makes you sweat. It’s the month where even places with normally temperate climates can become unbearable and you don’t want to do anything that involves going outside. In other words, it’s the perfect month to stay inside somewhere cool and play poker. Today that’s easy to do almost no matter where you live thanks to the proliferation of big tournaments. But oddly enough, though, for much of the history of tournament poker there hasn’t been a lot on offer in August.

Before 1985 there were no poker tournament festivals held anywhere. But starting that year, Los Angeles was the only place to be if you wanted to play poker during the summer doldrums. The first Diamond Jim Brady tournament was held that year at the Bicycle Casino in Bell Gardens. It featured events in a number of disciplines, experimented with new tournament formats like the shootout, and had events across a range of buy-ins from $300 to $10,000. During its 10-year run the Diamond Jim Brady was second in the world only to the WSOP in attendance and prize money, drawing the greats from that storied series out to the coast for a month of tournaments. Johnny Chan won the 1987 Main Event, and its 1988 Main Event was the site of Phil Hellmuth’s first major tournament victory. T.J. Cloutier won the Main Event the last two years it had a $10,000 buy-in, in 1990 and 1991, and then again in 1992 when the buy-in dropped to $5,000. Eventually attendance at the Diamond Jim Brady dropped off, coinciding with the U.S. government’s ownership of the casino. The schedule shortened from a month to a week before finally ending altogether after general manager George Hardie left the Bicycle.

In 1995 the next tournament series to play out in August came along. The Legends of Poker replaced the Diamond Jim Brady at the Bicycle, following its formula and continuing to draw tournament players at about the same rate. The government’s ownership of the casino, which continued until 1999, didn’t help business at all, and attendance dropped off sharply over the next few years until the Legends series was almost shut down. Then in 2002 came the World Poker Tour, changing everything for good, and because of it the Legends of Poker is still with us today.

The Hall of Fame Poker Classic, running at Binion’s in Las Vegas with $1,000 tournaments in a number of disciplines, moved from October and November to August in 1997. The Binion family still ran everything in those days and as a result the series was able to draw many of the same players who attended the WSOP. It also drew some of the younger players who were just beginning to establish themselves at the time but would go on to become well-known in later years, players like Daniel Negreanu, Barry Greenstein, Layne Flack, Jennifer Harman, and a pre-ripping-everyone-off-at-Full-Tilt Howard Lederer. The respected series ran for the last time in 2002.

By the time the Hall of Fame Poker Classic shut down the poker boom was right around the corner and there were several smaller August tournament series running in poker hotspots around the world, including the U.K., Canada, and Australia. But August remained a dead spot on the worldwide schedule for big tournaments for several more years, especially after the WSOP moved to a summertime schedule in 2005 and gave broke players less time to recover the bankrolls they’d blown at the Series.

The boom was at its height in 2007, and new tournaments started popping up around the world: the Asia Pacific Poker Tour kicked off in the Philippines, the European Poker Tour ventured to Barcelona, and even the Legends of Poker-committed WPT added another event at the end of the month in Biloxi, Mississippi. In 2008 tournaments on the Latin American Poker Tour and Asian Poker Tour joined in and suddenly August was filled front to back with tournament poker. The situation remains the same these days, with dozens of countries around the world featuring August tournament series with low-to-mid-stakes buy-ins.

In the early days of poker’s expansion into the Asian market, Macau’s biggest poker tournaments were held in the month of August. The $5,000 Asian Poker Tour Macau Main Event in 2008, which sported a $1.5 million guaranteed prize pool, was won by U.S.-based poker pro Yevgeniy Timoshenko. J.C. Tran, who leads this year’s November Nine, took third place in the APT Macau Main Event in 2009, and Nam Le has finished both first and second in its High Roller event. The Asia Pacific Poker Tour was equally international – Nam Le also won its High Roller event in 2008, and Johnny Chan was runner-up in it to Vladimir Geshkenbein in 2009. The Macau tournaments have moved to the end of July these days, but often times the high rollers will stick around for a few days into August to play in what have become known as some of the world’s juiciest high-stakes cash games.

Perhaps the biggest addition of all time to the August tournament schedule comes this year as the Seminole Hard Rock casino in south Florida puts on the inaugural Seminole Hard Rock Poker Open. Running for three weeks from the 8th to the 29th, the series features 33 events in a number of poker disciplines with a pretty wide variety of tournament formats. Just those facts, combined with the south Florida setting, would be enough to get excited about, but the real selling point is the series’ championship event, which features an unheard-of $10,000,000 guaranteed prize pool. That’s twice as large as any guaranteed tournament that’s ever been held, setting this tournament apart from the pack before it even begins. Players around the poker world have been buzzing about this tournament for months now. If it comes anywhere meeting that massive guarantee, it could become the kind of event that poker players plan their schedules around for years to come. And to think, not that long ago there really weren’t any options for playing tournament poker in August! The times are changing and this once-forgotten month has suddenly become a vital part of the worldwide poker tournament schedule.