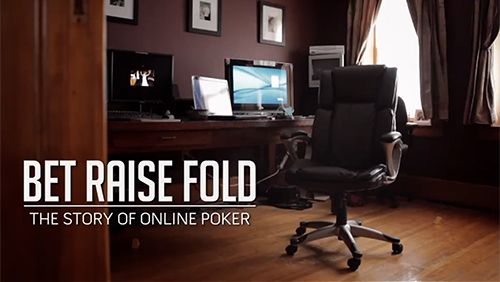 Jay Rosenkrantz (Producer), Taylor Caby (Executive Producer) and Ryan Firpo (Director) are the brains, and the brawn, behind the idea, and the documentary is available to be downloaded or ordered at betraisefoldmovie.com.

I guess Bet Raise Fold will mean different things for different people. Some will be entertained, some will be fascinated, others will be scared; some will be bored and others will be thinking, ‘tell me something I didn’t know’. I guess it depends what your standing is within the game, what knowledge and experience you have of the game and your relationships with all concerned.

The spine of the project is an online poker history lesson. The most interesting parts of which I found to be the insight into the way the Unlawful Internet Gambling Enforcement Act (UIGEA) was smuggled into law through the Safe Ports Act. Other than that, I couldn’t help but notice the things that were missing; for example, there is no reference to the Ultimate Bet cheating scandal, or any other cheating scandal that has damaged the reputation of online poker (other than the Full Tilt debacle). But I work inside the poker industry, and am familiar with the history of online poker. If I wasn’t, would I buy it? I don’t think I would. To be attracted to this documentary you have to be attracted to poker. The money will come from poker people, and I don’t think poker people are going to gain too many insights from the history lesson that Bet Raise Fold delivers.

What did interest me were the stories that Bet Raise Fold concentrated on. Plot is great, but it is the characters that make you scream, drag tears from your eyes and leave your heart beating faster than ever. You will relate to the character that mirrors your own life, and for me it was the story of Danielle Andersen that struck a chord. Getting an inside on how a family managed the events of Black Friday was the star of the show; but unfortunately once again I can’t help but feel a sense of lack.

It wasn’t until after I had watched the show that I realized Andersen was a $25/50 player. Why did I have to Google that fact? Why didn’t any of them talk about how much money they win or lose during a session? Why was there so much emphasis on how much money is won, and very little on how much is lost? Or am I missing something here? Maybe it’s just the professional poker players I know that are broke? Maybe it’s just me that lives in the illusion of beg, stealing and borrowing just to remain in the game…in the poker life.

I couldn’t connect with Bradstreet and I didn’t believe Dunst. What I needed was a view of a small stakes grinder. A look inside a $1/2 online poker player’s world and what it meant to them when their world came crashing down. A camera that was shoved so far into the arse of their world that we learned everything that there is to know about what it means to be a professional online poker player, and therefore how damaging it was for the US Government to take it all away.

Instead, we got to see Dunst & co telling the world how easy it was to win a lot of money and then having it all taken away; and that’s not a plotline that carries a great deal of sympathy. Poor old millionaires. People love a rags to riches story, but the sensationalism of online poker just doesn’t carry the weight of empathy that I need to get deeply involved in the storyline. Bradstreet’s world didn’t change as he was based in Canada, Dunst continued to earn a decent salary as a host on the World Poker Tour (WPT) and receives backing to play in most of the Stateside live events; so the real story was that of Andersen, and like this old broken record keeps stating, there wasn’t enough devil in the detail for my liking.

After I watched the documentary there was one thought that dominated my mind. What is its purpose? If it’s for entertainment then I didn’t feel entertained, if it’s for educational purposes I did feel somewhat educated, but if it’s aimed at attracting new players to the game, or to poll some much needed sympathy from the higher echelons of power, then it fell way short of the mark.

After watching Bet Raise Fold, it’s a little wonder anyone would ever want to play online poker ever again, especially in the United States of America.