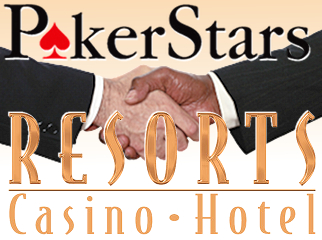 Online poker titan PokerStars has inked a partnership with Atlantic City casino operator Resorts Casino Hotel to offer online gambling to New Jersey residents. Mark Scheinberg, CEO of Stars’ parent company the Rational Group, called Resorts a “fantastic partner for us and we are looking forward to launch PokerStars in the US in association with the other quality brands Resorts has brought to Atlantic City.”

Resorts chairman Morris Bailey released a statement calling Stars “another blue chip partner to complete a wonderful series of brands – Mohegan Sun, Margaritaville and now PokerStars.” Resorts, which was the first gaming joint to open in the east coast gaming hub 35 years ago last month, was acquired by the late Dennis Gomes’ DGMB Casinos outfit in 2010.

Questions remain as to whether Stars will pass muster with New Jersey gaming regulators. When Stars appealed the New Jersey Superior Court ruling that called time on the Atlantic Club deal, Stars had argued that Judge Raymond Batten had effectively killed the regulators’ willingness to follow through on their vetting of Stars. It will also be interesting to see if the American Gaming Association repeats its Caesars Entertainment-induced campaign to keep Stars out of New Jersey.