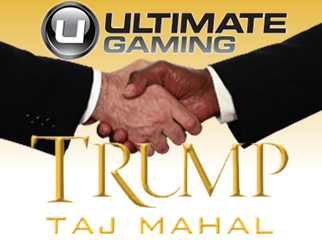 Nevada-based Ultimate Gaming has inked an online gambling partnership with Atlantic City casino Trump Taj Mahal. Ultimate Gaming, an offshoot of Fertitta Interactive (itself an offshoot of brick-and-mortar outfit Station Casinos), became the first Nevada-licensed online poker operator to launch real-money play in the US in April of this year. Unlike its Nevada poker-only operation, Ultimate Gaming’s New Jersey tie-up will be able to offer a full range of online gambling products, including slots and casino table games.

Ultimate Gaming chairman Tom Breitling called the deal with Trump Taj Mahal Associates “a huge step forward in our desire to offer Americans across the nation the opportunity to enjoy safe and regulated online games.” (That said, there’s as yet no movement on a Nevada-New Jersey interstate compact to share online poker liquidity.) Ultimate Gaming CEO Tobin Prior said the deal would be similar to its Nevada set-up, under which both land-based and online customers can earn loyalty rewards.

Atlantic City’s other Trump casino, the Trump Plaza, isn’t part of the deal. In February, the Plaza struck a deal to sell out to California-based Meruelo Group for $20m in February, but that deal was dismissed as too low for billionaire Carl Icahn, who holds the Plaza’s estimated $290m mortgage.

The Taj Mahal deal brings the number of confirmed casino/online tie-ups to four: the Boyd Gaming/MGM Resorts-owned Borgata has teamed with European operator Bwin.party digital entertainment, Caesars Entertainment’s four AC casinos will utilize technology by 888 Holdings, and the Golden Nugget has a free-play deal with Bally Technologies. That leaves the Atlantic Club, the Plaza, Resorts Atlantic City, the Tropicana and Revel still without a dance partner.

The New Jersey Division of Gaming Enforcement had established a Sunday deadline for AC casinos to declare their intentions or risk missing the anticipated mid-November launch of real-money online play, but that deadline has now been pushed back to 1pm EST Monday, suggesting there’s some frantic negotiating going on behind the scenes. Stay tuned.