Home / Poker / WSOP Recap: Hamby Fighting Back the Tears and Gross Proving He’s Not a One Trick Pony 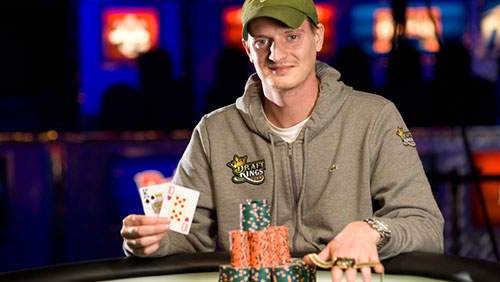 It was great to see so much emotion etched on the face of Hamby as he sat down with the PokerNews sideline reporter, Lynn Gilmartin, after his win.

“I am a little overwhelmed right now…I have been through a lot to get here…this is obviously a life goal of mine…I am ecstatic.” Said Hamby as he choked back the tears.

Hamby had to play the waiting game as he found himself at the bottom end of the pack throughout the final stages of the tournament and that included his heads-up encounter with Peter Hengsakul.

“He ran me over. Then I went on break, found out what he had and tried to formulate a different strategy. I changed gears completely and was bombing in. Fortunately, it worked out for me and I won a couple of huge races.”

“I am not doing anything differently on the tables. Off the tables my life is better. I am happier, it gives me a clear head and I am making better decisions. It’s a combination of running good, playing well and being in the right frame of mind.”

I couldn’t have said it better myself.

After winning $879k in live Hold’em tournaments and over $6m in online Hold’em tournaments, you would have thought Steve ‘Gboro780’ Gross was a one trick pony. A perception he has put to bed with victory in one of the toughest tournaments in the series. Event #41: $5,000 Pot-Limit Omaha (PLO) Six-Handed.

Gross defeated another NLHE hardcore in Salman Behbehani in heads-up action to capture his first major live title and $488,817 in prize money. Hats off to Behbehani who has cut down on his poker antics after decided to concentrate on his family business, but still shows up to ship himself a $301,965 purse.

“So happy right now. Never play PLO, ran this bird as a satellite to One Drop. Gratz to Geebz, mans a Lejj.” Behbehani announced on his Facebook page.

It was 2005 that Rory Mathews first came to prominence for UK poker lovers when he qualified for the Poker Million, which was broadcast live on Sky Sports TV. Mathews finished third in his heat losing out to the great Donnacha O’Dea and big things were expected from the Scotsman.

Fast forward eight-years and Mathews must be doing something right because he is still in the game, but his live tournament record is sparse when it comes to deep runs in the games biggest tournaments. A fact that is about to change as Mathews sits at the top end of the chip counts with just seven players remaining in Event #42: $1,000 NLHE.

The final table of Event: #43: $10,000 No-Limit 2-7 Draw Lowball has been cast and it is a stacked final table with no fewer than five former WSOP bracelet winners taking a seat. Six time bracelet winner Layne Flack leads the crew, but there is nothing in it as Jesse Martin, Jeff Lisandro, David ‘Bakes’ Baker, John Hennigan, Jon Turner and Konstantin Puchkov all have more than enough chips to make a strong attack on the title.

Dan Kelly continues to show the world why he is one of the best in the deep field events, after finishing second in chips after the first day of action in Event #44: $3,000 NLHE. 1,072 players started the event and at the time of writing 154-players remain as the action coasts into Day Two.

Jeff Times, Ognjen Sekularac, Bart Hanson, Noah Vaillancourt, Stephen Chidwick and Sorel Mizzi are just a few of the names joining Kelly at the top of the charts.

117-players will get paid and if Kelly sneaks in it will be his ninth cash of the series.