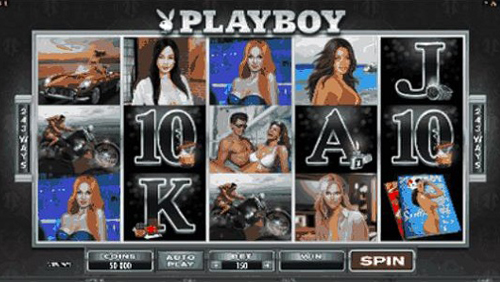 We’re all thoroughly familiar of the drill. A press release is published and a new product is rolled out to casino clients. In exceptional circumstances operators will draw attention to the new game via free spins or some other form of bonus.

It’s a process that is repeated on a monthly basis and now takes place with most involved on auto-pilot mode. Despite the fact that new content is almost constantly being added to the rosters of online casinos, it all feels very samey. Everything changes, everything stays the same.

This is why it was a welcome surprise when Microgaming sent out invitations for a press launch for their new Playboy slot. This was the first time that Microgaming had held such an event and given that two of their staff made the trip from their Isle of Man base to London, it suggested that a higher level of importance was being placed on the launch of this game.

In London’s Playboy Club Microgaming’s head of casino Mike Hebden and marketing colleagues Janine Woodford and Anna McChesney revealed the new game along with its gamified features and a heavy use of the Playboy brand.

Hebden explained how Playboy’s 97% global brand awareness and huge social media presence meant that doing a deal with them was a no-brainer. The Playboy Live Dealer products enabled by the same licensing deal were launched in April and are starting to gain traction.

But rather than rely on the power of the Playboy brand, Microgaming have clearly put the work in to make this slot stand out from much of what’s been before. A video detailing some of the creative processes that go into the creating of a slot showed Microgaming’s Durban-based artists starting out with hand drawn characters and their musicians compiling the music which accompanies the game.

This level of control and detail is something that’s required now that some software developers such as Net Entertainment, Betsoft and Sheriff Gaming have focused on making slots a work of art. But in addition to impressive graphics the Playboy slot features ideas that Hebden admitted were inspired by social gaming with different levels and eventual entry into the Playboy Club.

This is yet another step in Microgaming’s apparent change of tack to offer what could be considered as softer slots, a trend which was previously most obvious with the Max Damage slot. Of course, more traditional slots are still being released at a rate of three or four per month but it’s these premium games that offer operators more marketing opportunities.

While the new slot is very impressive, what’s perhaps of even more significance is the level of openness that Microgaming displayed. Whether it’s a conscious effort to bring their brand to life or just a series of coincidences is up for debate, but they appear to be much more willing to speak about what’s going on.

Compare this attitude to that of Microgaming’s main rival Playtech who remain tight lipped at all times and it’s a very encouraging sign – one that will surely bode well for attracting new clients in the future.

Among the things that were disclosed (hopefully not in confidence) was the fact that more licensed products are to come before the end of this year and the promise of another event where, to some extent, Microgaming will map out their plans for future products. Should this come to fruition it would be an extremely rare occurrence in an industry where future plans are kept well under wraps.

While public companies are required to release top line information such as significant staff changes, their fear about how stock markets might react to any comments that are even remotely controversial means that often speaking to them is akin to drawing blood from a stone.

Private companies aren’t much better either. They see the fact that they don’t have to share any information as an advantage which they hold over public companies and as such often remain tight lipped about all but the most trivial information.

Hebden even treated those in attendance in London to a video showing the creation process behind the Microgaming slots while admitting that previously they hadn’t thought of this type of content as interesting to anyone outside the company. While trade secrets aren’t exactly being given away, by releasing content such as this Microgaming appear to be a much more amicable organization while it can even serve as a form of content marketing that could increase brand awareness.

Even if this effect doesn’t occur, any company willing to share their plans and ideas is a welcome change, and one that we’ll hopefully see much more of.