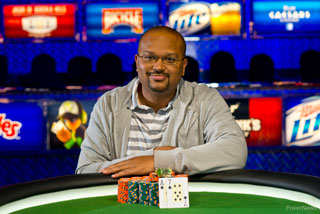 It was the second cash of the series for Harrison and each one has brought him his biggest cash to date, and it may be some time before he once again beats that record after capturing $432,411 for the win.

All eyes were on the man known as ChicagoCards1 as Charania started the day third in chips and set off like a greyhound with a cracker up its ass. The former EPT Grand Final Champion eliminating both Robert Brewer and Gareth Teatum before suffering a terrible blow against the overnight chip leader Salvatore Dicarlo. It was a blind battle with both players staring at a flop of [Kh] [9d] [7h], Charania led for 115k from the small, Dicarlo raised to 280k from the big, Charania moved all-in and had Dicarlo covered when he called. It was [Ac] [9s] for Dicarlo, giving him second pair, and [Kc] [7s] for Charania with two-pair. The [2c] on the turn changed nothing, but the [9c] on the river sure did. Dicarlo moved up to 1.9m and Charania was down to 550k and was later eliminated in sixth place; one spot after Ziyard left the competition in seventh.

Harrison took the title after a two hours heads-up confrontation with Daniel Cascado. It was [As] [7s] v [Ks] [Tc] in the final hand and Harrison spiked the [Ad] on the flop to take the honors. Cascado took $267,452 for his runner-up spot.

Danny Fuhs must have wondered if his moment under the glare of the spotlight would ever arrive? Final table appearances in World Poker Tour (WPT) and World Series of Poker (WSOP) events are inked on his resume, but a long career on the road had never seen that coveted number one position fall into his back pocket. That was until he entered Event #25: $5,000 Omaha Hi-Low 8-or-Better.

241-entrants created a total prize pool of $1,132,700 and the final day of action contained a plethora of pokers finest. Huck Seed, Maria Ho, Dan Kelly, Alex Kostritsyn, George Danzer, Shawn Buchanan, Mike Matusow and Jonathan Duhamel all falling on one sword or another before the final table was cast in stone.

Despite the luminaries leaving early the final table still had some great players in the running. Both Bart Hanson (9th) and Ryan Lenaghan (8th) were back at the same final table they reached last year and they were joined by Jeff Lisandro (7th), Brian Hastings (4th) and Robert Mizrachi (3rd). Neither had the legs and that left Fuhs and Christopher George to fight it out for the title, which after a pretty brutal session, Fuhs emerged as the victor.

Over in the senior’s event and the second day of action has been completed with just 34-players remaining from the original field of 4,407. James Miller leads the rest and the biggest star remaining in the pack is Hoyt Corkins who made the final table of this event last year.

Event #27: $3,000 NLHE (Mixed-Max) has seen Brandon Cantu barge his way to the top of the chip counts for the final day of heads-up action. 32-players remain and Cantu has a slight chip lead over Jeremy Ausmus.

The last time Cantu hit the poker headlines was in the WSOPE €10k Mixed-Max event where he complained bitterly about his final heads-up match against Jonathan Aguiar. The pair battled so hard the casino threw them out when the time reached 5 am. Cantu wanted to maintain his momentum and re-start the match ASAP but the WSOP made a ruling that both players would continue their heads-up encounter only after both had busted from the main event. Both players busted on Day1B early, the heads-up match continued, Aguiar won, Cantu went on any camera that was shoved in his face to complain bitterly about the ruling and later won a rematch at the Aria for $130k. Aguiar told the world he only had $18k invested in the match and Cantu told the world that it was proof that ‘crying and complaining really does work in poker.”

Aguiar is nowhere to be seen in the final 32, but there are still a lot of big names pros in the field including Matthew Waxman as he heads for his second bracelet of the summer.

Another potentially great tournament for the Canadians could be Event #28: $1,500 NLHE. 2,115 players entered and after the days first flight only 233 remain with Jason Duval at the helm with 149,700 chips. Duval, who has already cashed twice at this years WSOP, is looking to extend on his great form that saw him finish third at the WPT Canadian Spring Championship back in May. A barrage of Brits also finished at the top of the leader board including Craig McCorkell (117,800), Chris Brammer (100,500), Ash Mason (96,600) and Rupert Elder (93,500).

Chris Klodnicki leads the final 154-players in Event #29: $5,000 H.O.R.S.E, but he is in good company with Tom Schneider going for his second bracelet of this series and the 2011 H.O.R.S.E champion Fabrice Soulier also in contention.