Cliff ‘JohnnyBax’ Josephy has claimed his second World Series of Poker (WSOP) bracelet after winning Event #9: $3,000 No-Limit Hold’em Shootout event. Josephy, who won his first bracelet back in 2005, was the only man to win all three of his mini Sit n Go’s to claim the first prize of $299,486. 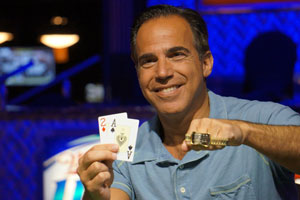 Event #10: $1,500 Limit Hold’em event handed yet another gold bracelet to an American. Brent Wheeler defeated 645-players in the game that can bore a man to tears, after defeating the Canadian Mark Mierkalns in heads-up action. Wheeler banked $191,605 for a victory that surpassed his previous best of $119,320 when he finished fifth at the European Poker Tour (EPT) leg in Snowfest back in 2010.

14-players remain in Event $11: $2,500 NLHE (Six-Max) and Levi Berger has a dominant lead over an impressive field that contains the likes of Tuan Le, Scott Clements, Eddy Sabat, Jacob Bazeley and Mickey Petersen. The Day One chip leader, Tamara Tibbles, also made it through to the third day of action. There is $473,019 up for grabs in that one.

Event #12: $1,500 Pot-Limit Hold’em attracted 535-players and 62 of them managed to eek their way through to the second day of action. The chip leader is Robert Corcione who finished a respectable 21st place in last years WSOP Main Event. The former champion Nick Jivkov remains in the field as does bracelet hunter Jason Mercier, multiple bracelet winner Allen Cunningham and former WSOP Main Event runner-up Martin Staszko.

191-players entered Event #13: $5,000 Seven-Card Stud Hi-Lo 8-or-Better, making it one of the smallest events of the series. Only 31-players bit the dust after the first day of action, and the 2009 EPT Grand Final runner-up Matt Woodward has the chip lead. Gavin Smith, David Bach, Maria Ho, Daniel Negreanu,. Eli Elezra, Mike Sexton, Mike Matusow and Jason Mercier just a few of the top players remaining in the field.

Team Mike Gorodinsky has taken the early lead in the $25k Fantasy Poker competition organized by Daniel Negreanu. That lead has been earned by the team captain himself winning Event #5, and Dan Kelly taking two final tables to become the MVP of all of the players selected in the draft.