It was golf, poker and good old-fashioned rock n roll as the 15th Annual Tiger Jam raised money for the Tiger Woods Foundation in Las Vegas. 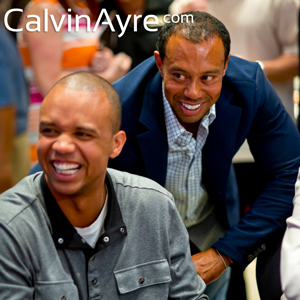 Tiger Woods, and his father Earl, established the Tiger Woods Foundation in 1996, as a way of providing education for under privileged children, and it has since turned into an organization that has a reach around the globe.

This weekend held the 15th Annual Tiger Jam. A weekend chocked full of charitable events designed at creating funds for the children that benefit from the Tiger Woods Foundation.

It started on the Friday where sponsors and guests were invited to a private golf exhibition from the great man himself. The course of choice was the Cascata Golf Club and Kid Rock and the Los Angeles Clippers star Chris Paul were on hand to get some extra special tuition.

In the evening it was off to Mandalay Bay where the World Poker Tour (WPT) hosted a special charity event. Woods was once again joined by Kid Rock and Chris Paul, as well as entrepreneur philanthropist Mark Cuban and actor Mekhi Phifer. A charity poker tournament would not be complete with out some top poker talent and Phil Ivey, Phil Hellmuth, Doyle Brunson, Mike Sexton, Daniel Negreanu and Dan Shak all joined the fray.

How often do you hear Phil Ivey referred to as ‘the Tiger Woods of Poker?” Well the pair shared a table until Woods was the first to be eliminated from the competition, after his jack high flush was smashed to smithereens on the river by the boat of the amateur Melinda Fey. The winner of the event was Scot Dillon who has earned himself a Pro-Am spot with Tiger Woods at the AT&T National. Shak also picks up a Masters tournament experience as the longest lasting pro.

After the poker it was the turn of Kid Rock to take center stage as he rocked and rolled his way through a set including Cowboy, Born Free and Rebel Soul in front of 8,000 fans, before the night moved on to the nightclub – much to the chagrin of a water drinking Phil Hellmuth.