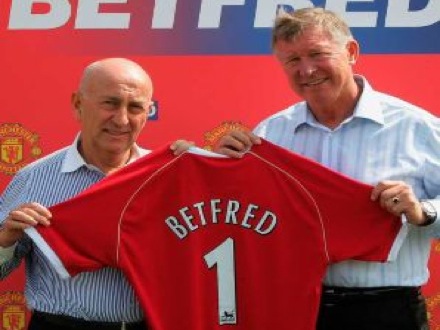 BetFred boss Fred Done can rest easy and breathe a sigh of relief; that early payout he made on Manchester United backers last February to win the English Premier League title didn’t come back to bite him in the ass the way it did last year.

And if he should be laying a big smooch on somebody for the result, he ought to plant a big, fat one on Robin van Persie.

The Netherlands striker secured United’s unprecedented 20th EPL title with a masterful treble that triggered the party at Old Trafford well before halftime of their match against relegation-threatened Aston Villa. With four matches left to play and 16 points clear of rival Manchester City, the 2012-2013 EPL title is now officially in the books, a result that drew a sigh of relief from the bombastic Fred Done.

“I paid out on Man United winning the league in February and thankfully this time I didn’t get it wrong,” Done said immediately after the match ended.

Thankfully is an understatement, especially after Done’s decision to pay out United to win the EPL title last year blew up in his face after Manchester City staged an improbable comeback in the last few weeks of the season, punctuating it with a dramatic finale against QPR when it scored to goals in injury time to wrestle the title away from  the red side of Manchester.

That result prompted Done to pay out City backers after the season, in addition to the costly gaffe of paying out United punters a few months earlier.

But there won’t be any late-season miracles this time around, much to the relief of Fred Done. And for that, the famous United supporter needs to thank RVP and the rest of the team for slamming the door shut on another dramatic conclusion to the season.