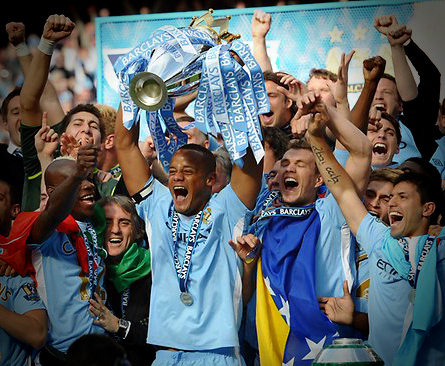 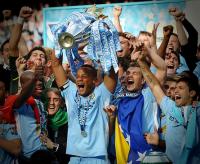 After a season that has defied all sorts of rationale expectations, should we have been all that surprised that the EPL’s version of “Super Sunday” would go down the way it did?

The short answer: no.

As for the long answer? Well, that’s going to feature a whole lot more head-scratching after Manchester City pulled off one of the most remarkable and unbelievable comebacks in sporting history to win, or some would say, ‘steal’, the English Premier League title from the hands of its cross-town neighbors, Manchester United.

Here’s how the scene looked like entering “Super Sunday”. Both Manchester teams were tied in the points standings with 86 points apiece. But with a bigger goal differential, City was in the driver seat to win its first English football title in 44 years. The only thing they needed was to win their season finale against a Queen Park Rangers team that was on the verge of relegation. A United win would be irrelevant if City nabs those final three points.

For their part of Super Sunday, United disposed of Sunderland 1-0, ratcheting up the pressure for the Citizens to win against league doormat Queens Park Rangers at the Etihad Stadium.

Everything seemed to be going according to plan for City after Pablo Zabaleta put them in front in the 39th minute, leaving them only a half and some few minutes of extra time to win the title. But just like sports drama at its finest, that was still a half unplayed, where anything, and we mean anything, could happen.

That’s when things took a turn for the surreal.

First, QPR star Djibril Cisse took advantage of a misplay by Joleon Lescott and drew QPR even with a strike in the 48th minute. In the 55th minute, notorious hot-head, and QPR captain Joey Barton was sent off after going WWE on Carlos Tevez and Sergio Aguero with a chop to the elbow on the former and a knee to the back on the latter. So with only 10 men the rest of the way, Man City’s road to the EPL title just got a little easier, right?

In a spectacular display of defensive fortitude, QPR repelled wave after wave of City’s attacks before somehow breaking through in the 66th minute with a scintillating counter-attack, culminating in a powerful header by Jamie Mackie in the 66th minute. Somehow, through whatever kind of sports drama you could think of, QPR was ahead 2-1 against a team on the verge of the most disastrous choke job in English football history.

With time running out and tears slowly filling the Etihad Stadium, City manager Roberto Mancini subbed in strikers Edin Dzeko and Mario Balotteli, two names that would figure heavily in the dramatic conclusion of the match.

After 90 minutes of play and QPR’s defensive wall still holding strong,  it seemed like a formality that this stunning result would be the stake that’s driven to the hearts of City fans the world over.

Then, the scene turned from the surreal to just epic madness.

Two minutes into extra time, Dzeko struck in a powerful header past QPR goalkeeper Paddy Kenny, drawing the home team even and giving them three minutes of real time to pull off the craziest ending to an EPL season in history. As soon as the ball was put in play, City went back on the attack, clinging on to whoever thread of championship hope they had left.

Within seconds of the final whistle being blown at the Etihad Stadium, City had one last attack left. Balotelli, regarded as a pariah a few weeks ago, caught the ball on the top of the box and before getting tackled, managed to squeeze in a pass to a streaking Sergio Aguero, who jumped over a defender and launched a kick that will go down in the legend of Manchester City, beating Kenny and finding its way on the back of the net.

The scene and fallout after the Argentine Aguero, the son-in-law of Diego Maradona, scored the championship goal that won Manchester City the 2012 EPL title was pretty hard to describe. 15 hours later, we still can’t explain exactly what happened.

The only thing we know is that Man City are the champs. How they did it, we’ll probably never fully come to grips with; it was one of the most unbelievable finishes to any sporting event we’ve ever seen.

We can run thought a dictionary’s worth of adjectives and it still won’t capture the conclusion of that match and the championship repercussions that came out of it. Maybe we’ll just leave it at that then, because no matter how much superlatives we throw around to describe that game, the truth is that no amount of words will really describe those final three minutes.