The Irish Bookmaker, Paddy Power share their most successful year to date with the release of their 2012 Annual Report. A report that contains so much more than merely numbers. 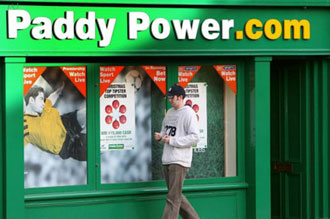 The Irish funsters at Paddy Power cannot be serious for a single moment as is proved by the release of their 2012 Annual Report entitled, ‘Cooking up mischief – a practical guide to horseplay,’ showing a picture of a mooing horse and a chef with a tasty slicer in hand, in reference to the 2012 horse meat scandal.

Here are the meatiest pieces of the…erm…horse?

Paddy Power are hoping that the 2012 Annual Report lands on the desk of the appropriate ministers as they urge the government to ‘recognize the highly competitive nature of the industry, the challenges of enforcing taxes on rogue offshore operators and the propensity for consumers to migrate to the best value offers,’ when implementing the point of consumption (POC) tax.

To somewhat emphasize a point to the rulers of taxation, the report shows that Paddy Power employ 3,767 people with 2,166 in Ireland, 1,129 in the UK and 472 in countries as far and wide as Australia, Italy and Canada. The employment levels are 20% higher than those declared back in 2011. From a taxation perspective, Paddy Power had forked out €159m (€70m Ireland, €52m UK and €37m rest of the world), a cost that is going to increase sharply when the POC tax is introduced.

The online realm continued to be the strong arm of the business with advancements in mobile betting, social media and social gaming; but the retail division was also running along nicely with a record 44 shops being opened in the UK, during 2012, meaning there is now a bigger presence on the high street of the UK than there is in Ireland.

From a dividend perspective the net cash at the end of 2012 was €209m despite a 37% increase in dividends paid to shareholders, and investment in those 44 new retail outlets and its online advancements. This was an increase of €74m compared to the previous year, and the board proposed a final dividend of 16% to 81.0 cent per share, bringing the total dividend to €58.9m or 120.0 cent per share, an increase of 20% in 2011.

The report showcased the major events that helped create record profits for Paddy Power during 2012 including Euro 2012, the Ryder Cup, Cheltenham, the Italian launch, Royal Ascot, Social Media, the US Presidential Elections, the Olympics and the ‘We Hear You’ advertising campaign.

The magical moments included Niklas Bendtner scoring for Denmark and then pulling his shorts down to expose a pair of bright green Paddy Power underpants. Those y-fronts were responsible for extending Paddy Power’s reach on twitter to over five million followers in a move that Mediacom Denmark believed was worth £10m to the Irish bookmaking giant. Then you had the world record message in the sky at the Ryder Cup that read ‘Good luck Tiger! Love, Rachel, Mindy, Jamie, Cori, Kalika, Holly, Joslyn, Jamie, Loredana, Julie, Theresa and Raychel X #GoEurope’, the hilarious moment when they defaced the 3,000 prehistoric carving of the iconic ‘White Horse of Uffington’ by adding a jockey to it and lest we not forget the banners they produced when they paid out early in the region of £400,000 for the US Presidential elections that stated, “Sorry Romney, you’re not black, or cool.”

2013 has also started brightly for the men in the bright green underpants. Sportsbook amounts staked are up 19% and total net revenue is up to 34% after the first two months of the year, but there is a worry that unfavorable exchange rates against the euro could see operating profits reduce by approx. €10m in 2013.