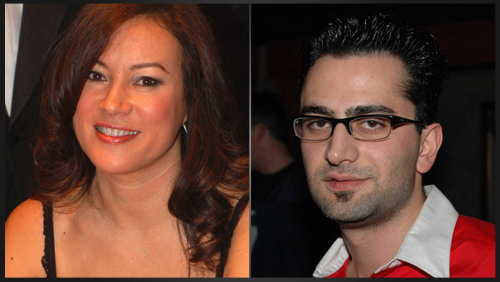 PokerNews owner, Tony G, put it all together to win the final heat of Group B, and give himself a shot of a final table berth, only to see those hopes reduced to ashes in the final heads-up encounter against Jennifer Tilly.

After the magnificent German, Tobias Reinkemeier was eliminated in third place, it was left between Tony G and Phil Laak to duke it out for maximum points. As the league table stood at that time, Tony G, was guaranteed a place in the play-off, irrespective of winning or losing against Laak. But Laak had a dilemma on his hands, because a win would have pushed his good lady Tilly out of the reckoning. It was time to see who wore the trousers in the Laak/Tilly household.

In the end it proved to be Tilly. The pivotal moment in the heads-up encounter came after Tony G opened the button holding [Ad] [Jd] and Laak defended with the measly looking [7h] [6s]. The board was [7d] [6h] [2d], giving G the nut flush draw and Laak top two pair. It was all over. But how the action would be finalized was a different matter. The turn [Kd] gave G the flush he wanted and he bet 60,000, once checked to, and Laak just called. The river card was the [8h], Laak checked, G shoved and Laak called.

“I’ve won everything,” said Tony G, “everything.” He was spot on. Laak was out and Tony G advanced to meet Tilly in the heads-up playoff.

It was a best of three heads-up encounter and Tilly got some revenge for Laak when she trounced the Lithuanian 2 v 0 to take her seat in the final.

“She absolutely obliterated him,” said Jesse May in the commentary booth.

In the Group A playoff we saw last years champion, Scott Seiver, taking on the biggest money earner in the game Antonio Esfandiari. Two men on form, and predictably it was a tight affair. Seiver took the first match in a horrific cooler. Both players got the money in holding ace-jack, but Seiver’s was suited, and he hit his flush to shove the first match beneath his belt.

But Esfandiari is made of stern stuff. The Magician dusting off his disappointment to win the next two matches to book his seat on the final table. In the penultimate match Seiver moved all in holding [Kd] [Td] only to be called by the [Ah] [Kh] of Esfandiari. The ace high hand held and the pair were now level. Then Esfandiari found the luck that  had deserted him in the first match when he picked up pocket treys and moved all-in, only to be called by the pocket fours of Seiver. The flop of [Jc] [5h] [2s] was good for Seiver, but the [3h] on the turn handed Esfandiari the lead, and then finally the match when the [Qs] completed the action.