Delaware was the second state in the Union to legalize poker, and when it did it went virtually unnoticed. The second smallest state in the nation by size and the fifth smallest by population, Delaware doesn’t grab a lot of attention. If you’re an American, the chances that you yourself are from Delaware are only about 1 in 315, and even then I’ve been told there’s a 50 percent chance your number one thought is going somewhere other than Delaware.

Besides its inherent dullness, Delaware had already been completely beaten to the punch by Nevada, which was the first state to legalize online poker. Add that “first” status to the glitz and glamour of Las Vegas, followed up by full legalization of internet gambling in New Jersey, and there was really no reason for anybody to think twice about Delaware anymore.

Now that the tiny state everyone forgot about wants to go live with online poker by the end of September, ears are perking up. When the Delaware state lottery originally sent out a call for providers in February to apply for licenses, it didn’t have the big casino interests breathing down its neck like in Nevada. So in asking for companies with at least a year of experience running real-money games online, the state didn’t rule out companies that have operated in North American markets. The result? Among the 14 companies that have applied for Delaware licenses is Rational Group, the parent company of PokerStars.

Rational isn’t the only well-known applicant, being joined as it is by 888, IGT, and the owners of the Ongame Network. But it is by far the biggest company that remained operational in the U.S. market after UIGEA. That’s left a bullseye on the company whenever the Vegas casinos have had a say in things. But so far they’re only 1-for-2 in implementing the so-called “bad actor” clause. Specifically designed to keep established online companies from competing with the struggling brick-and-mortar businesses, it was an easy pass in Nevada. But New Jersey said no to adding such a clause to its law, partially because PokerStars was willing to take on ownership of the foundering Atlantic Club.

As a result, Delaware has suddenly become very interesting. There may not be a bad actor clause, but the state could choose to reject PokerStars. If so they would be passing up what is widely considered the most established, well-tested poker software in the business – and after having declared that “proposed components of the Solution must be delivered, installed, implemented, acceptance tested and ready to be operational by the agreed-upon schedule,” no less. If, however, they opt to accept Rational’s application, they’ll give the company its first tangible foothold in the U.S. market following its settlement with the Department of Justice. That makes the future of online poker in America a lot more interesting, especially if Delaware or New Jersey can beat Nevada to market.

(Just for the record: I do occasional writing work for PokerStars’ blog.) 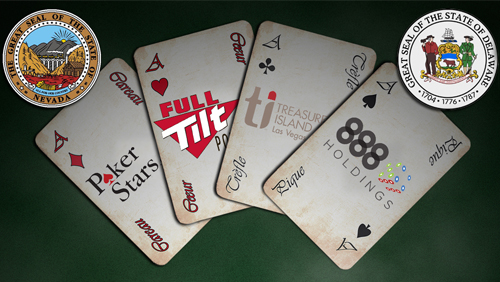 Meanwhile, in Nevada, the Holy Grail of American online poker has come one step closer to reality. 888 has already been approved for partnership with Caesars, owners of the World Series of Poker. But due to licensing requirements, the two could not go live with an online WSOP site until both companies were approved separately. Caesars already has its license, but 888 had yet to be approved. As of yesterday, though, they’re officially licensed to do business in Nevada.

“888 has chosen Nevada as its first U.S. market, and we are hopeful that future developments will present even greater commercial opportunities for 888’s Nevada-facing business,” 888 CEO Brian Mattingley told the Nevada Gaming Commission.

That means that the first steps to making a 24/7 WSOP online poker room a reality have been taken. But 888 is going to be running the show for another well-known Las Vegas brand. Treasure Island, LLC, was also approved for an online poker license yesterday. It plans to license software from 888 on the new “All American Poker Network,” of which it is the first member. Both outfits should be in good shape if Nevada can work out a compact with New Jersey.

Part of Rational Group’s settlement with the DOJ last year included the purchase of Full Tilt Poker. Formerly the #2 online poker room in the world behind PokerStars, it had one of the strongest brands in the business and was a favorite of many an online poker player before ownership was busted without enough money to cover player accounts. While American players still wait to get their money back, Europeans have been back at the tables since last November. That relaunch traffic brought thousands of players back to the tables. But it appears that many of them may have only come back long enough to claim their money and leave – or to lose it and never deposit again. Full Tilt’s traffic averaged just under 3,000 cash game players last week, down from just under 9,000 the first week the site was back online. That’s less than PartyPoker and iPoker, which doesn’t bode well for Full Tilt.

If this trend continues, Full Tilt’s continued long-term value becomes suspect. It could eventually take off in the American market again if given the chance. Or, bereft of rakeback and other bonuses, those players could abandon the brand just like the Europeans did. They might even head for the more comfortable pastures of, say, the new WSOP online poker room. It’s not hard to imagine a world where players could earn rewards toward play in live WSOP events for giving their rake to Caesars. And what would Full Tilt have to offer? A signup bonus that couldn’t compete with PokerStars, a lack of satellites to the WSOP, and a constant reminder of how good things used to be before Howard Lederer and Company had to go and screw everything up.