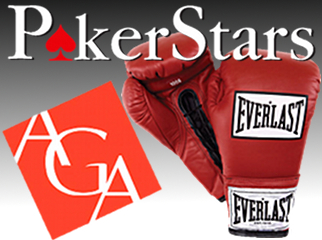 Online poker titan PokerStars has pushed back against the attempt by the American Gaming Association (AGA) to queer Stars’ quest for a New Jersey gaming license. In a 15-page submission to the state Division of Gaming Enforcement (DGE), attorneys Jeff Ifrah and David Deitch, acting on behalf of Stars’ US subsidiary The Rational Group, characterize the AGA’s efforts to keep Stars out of New Jersey as a “thinly-veiled anti-competitive campaign against the entry of a competitor into the market.” The letter goes on to describe the AGA’s unprecedented intervention in a gaming license approval process as little more than “economic warfare.”

Rational’s brief accuses the AGA of lacking a significant interest in the outcome of the proceedings, beyond as a “self-appointed group of Rational’s competitors.” Although the AGA represents a multitude of US brick-and-mortar casino outfits, the Lady Macbeth behind the AGA’s anti-Stars push is widely presumed to be Caesars Entertainment. Among AGA members, Caesars has the largest presence in Atlantic City, the largest debt and has been the most vocal in hitching its fortunes to future online gambling revenue.

Rational’s attorneys argue that since the AGA’s petition contained no information that wasn’t already in the public domain, the AGA’s participation in the licensing process “would be virtually valueless.” Forcing the DGE and the New Jersey Casino Control Commission to wade through the AGA’s “voluminous” filing – which Ifrah and Deitch describe as “measuring approximately three inches in height” – would compel Rational to file its own “equally voluminous” rebuttal to the AGA’s charges, all of which would slow down the process considerably. Regardless, the AGA’s petition is listed on the agenda of the Casino Control Commission’s next meeting, set for this Wednesday at 10:30am.

Last week, Brennan noted that Rational hadn’t yet completed its Interim Casino Application, a necessary step in Rational’s bid to acquire the struggling Atlantic Club casino-hotel in Atlantic City. That means the 90-day window in which the DGE is supposed to perform its due diligence on Rational has yet to open. Add in the 30 days in which the Casino Control Commission is allowed to ponder the DGE’s recommendation and Rational might not learn its fate – or that of the 2,400 Atlantic Club employees facing unemployment – until August at the earliest. As Brennan noted, Gov. Chris Christie will be campaigning for re-election by that time, and he’d likely prefer to do so knowing the Atlantic Club’s rescue is assured.