We’re a little late acknowledging this news but we wanted to extend our congratulations to Joey Rizzo on his recent nuptials to the lovely and gorgeous Elizabeth Herrera. 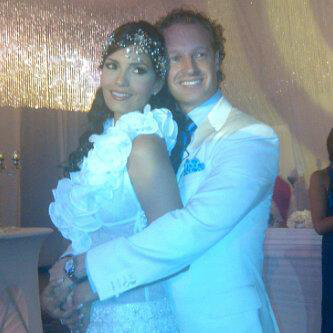 For those of you living under a rock, Joey/Ratso Rizzo, along with his brother Tommy, is the long time owner of US-facing and Costa Rican-operated sportsbook, BetUS. So Joey didn’t have to look far for love, as the lovely Miss Herrera was Miss August in the 2010 BetUS calendar.

The beautiful model and the BetUS owner were married in a traditional Jewish ceremony in her native Venezuela late last year with friends and family by their sides.

Joey’s brother Tommy (pictured next to Joey in the group photo) served as his best man.

Life is good for Joey; our sources tell us he’s sinking his sportsbook millions into real estate in Costa Rica and the USA. Rizzo has purchased a multimillion-dollar home off of Calle Vieja on the way to Santa Ana in the Costa Rican capital region. Plus he’s spending $6 million on a vacation home in Guanacaste, Costa Rica.

That’s all well and good, but as any married man will tell you, it’s the little woman that calls the shots, and we’re told Joey’s blushing bride isn’t entirely enamored with Costa Rica. She’s demanded a home in the US and Joey has been only too happy to oblige, splashing out on a $3 million crib in Miami. If anyone doubted the depths of the man’s affections, consider that it’s unclear whether Mr. Rizzo will even be able to join Mrs. Rizzo in their Miami lovenest as the current climate in the US isn’t all that favorable for Americans who operate US-facing sportsbooks. But hey, it’s only (someone else’s) money, and you only live once, right? Joey might as well buy his calendar girl a dozen different homes in which she can hang her bikini bottoms.

As for all those former BetUS affiliates still living under the impression that BetUS stiffed them for thousands of dollars apiece in commissions, Joey feels disappointed that none of them chose to attend the wedding. Joey swears he mailed their invitations in the exact same envelopes in which he enclosed their long-lost commission checks, yet there was no sign of his long-lost affiliate buddies on the ‘friends of the groom’ side of the temple. Rest assured, Joey isn’t taking the slight personally. Knowing how much everyone would have wanted to wish him well, he’s decided to apply all their outstanding balances toward purchasing wedding gifts that he knows his old pals would have wanted to present him with had they been there. (FYI, Joey and Liz registered at Tiffany’s, so no matter how much you were owed, consider it spent. And consider Joey grateful.)

As for those nattering nabobs of negativity who still consider it unfair that Joey and his blushing bride were dancing the horah while BetUS’ former affiliates were left muttering “the horror… the horror,” that’s so apocalypse then. Joey’s moved on, focused on the future, and so should all of you. Because really, what choice do you have? L’chaim!