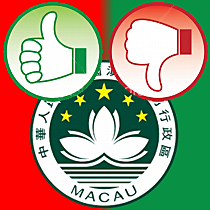 Macau casino stocks took a tumble at the start of this week on news that gaming revenues over the first 17 days of February had failed to meet expectations. HSBC Global Research put the 17-day tally at MOP 15.2b (US $1.9b), an increase of 12% over the same period last year, but below earlier estimates. The Lusa news agency put the total even lower, at MOP 14b. The disappointing total came despite Government Information Bureau statistics showing 1.28m visitor arrivals over the lunar new year celebrations between Feb. 8–17, a 13.6% increase over the same period last year. The number of visitors from the mainland rose an impressive 25.5%.

Last week, Union Gaming analyst Grant Govertsen suggested the hordes descending on Macau for lunar new year celebrations might prompt the high-rolling VIP gamblers to stay away, and it seems he had a point. Govertsen issued a note this week saying the revenue numbers were further depressed by the fact that “a few operators have had quite poor hold on VIP tables throughout the holiday period.” However, Govertsen found a silver lining in the fact that the junket-free mass market segment is significantly more profitable than the VIP business, so lowered revenue doesn’t necessarily translate into reduced profits.

Not all of these arrivals leave with a good taste in their mouths. The Macau Daily Times recently reported on a tour guide who called police after fearing for his safety at the hands of the irate visitors he was shepherding around the island. It seems the guide had attempted to charge the 17-member entourage from the mainland an extra RMB 200 ($32) apiece if they wanted to pay a visit to a casino. The tourists claimed this charge wasn’t listed in their brochures and the idea of putting their money into the guide’s pocket rather than onto the gaming tables had many looking for tar and feathers. The situation was resolved after police arrived, the junket-wannabe tour guide was changed and the tour proceeded to the casino as planned. And they all gambled happily ever after…