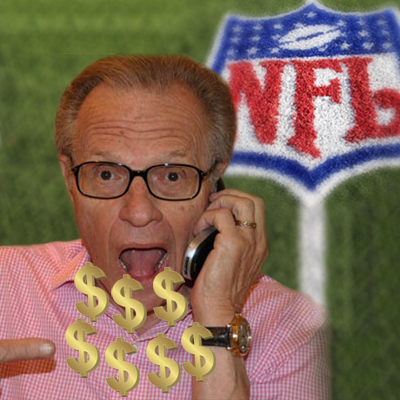 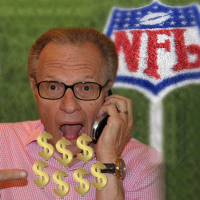 TV and radio talk show host Larry King holds many accolades under his belt that are just too many to mention. If we did mention them, they would probably take up more space than we’d like. So we’ll just leave it at that. But what we can’t leave out and something that was brought to our attention by a story on Forbes.com, is that Larry King is also a genius in picking NFL spreads.

In a story written by Forbes’ Monte Burke, King admitted to being on quite a hot streak picking NFL games this season, hitting on 14 of his 16 picks for the year. More impressive than his b(e)tting percentage of .875? He’s hit on his last 11 picks.

For a man who hasn’t engaged a whole lot in hyperbole throughout his legendary career as a TV and radio host, Larry King sure does know how to be understated.

His latest win only happened yesterday when he hit on the New York Giants to cover the five-point spread against the New Orleans Saints. His explanation: The Giants were coming off a loss against the Washington Redskins and the Saints’ defense sucks.

So, what’s Larry’s secret that he can impart to all those woe-be-gone bettors looking to bust out of their losing streaks?

Apart from following him on Twitter, where he posts his weekly picks, King usually takes one look at the spreads for the week’s games to see if there are any spreads that, in his words, “are out of whack”. He doesn’t bet on the Miami Dolphins, though, because he’s a fan of the team and is only adhering to the age-old maxim of “never betting on your sports team lest you subject yourself to bad juju”.

King usually scans the spreads of each game and tries to see if the numbers add up to what the circumstances are for both teams leading up to the games. One look at the early lines for Week 15 and he’s already set his sights on his pick of the week.

“The one that stands out to me is the Seahawks,” King tells Burke, alluding to Seattle’s -4.5 line against the Buffalo Bills. “My pick this week is the Seahawks. Maybe I’ll parlay and take the Giants, too.”

There you have it, fellas. Larry King, the football betting oracle himself, is picking Russell “Hustle n’ Bustle” Wilson and his ruthless band of ‘Hawks to win by five over the Bills.

Either we just jinxed him or he’s just that damn on fire.

As an aside, our very own Roc The Cock is making his own mark against the spread this year for Monday Night Football games, coming in with a sparkling 12-4 SU record and 9-5-1 ATS. With respects to Larry King, we’re going with Roc’s ATS record as being more impressive than going 14-2, if only for that simple matter that Roc’s an actual chicken making all these picks.