APT winds down 2012 Asian Series with packed card at Cambodia 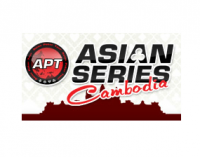 Cambodia will play host to the final leg of the Asian Poker Tour‘s highly successful 2012 Asian Series, putting a resounding exclamation point on what has been an action-packed year that saw the poker series head to numerous destinations in the Asia-Pacific region. From Cebu to Goa to Mauritius and back to Manila, the APT’s Asian Series has become a circled event on the calendar in the region.

Later this month, the series conclude with its final stop in Cambodia, a country that’s becoming more and more immersed into the world of poker. The tournament will be held from November 14 to 20, 2012 at the Las Vegas Sun Hotel & Casino, which is located in Svay Rieng near the Vietnam-Cambodia border. Just like the rest of the APT’s previous Asian Series stops, Cambodia will play host to a weeklong poker festival that will feature enough tournaments to make local and foreign players’ heads spin.

Speaking of the nine side events, that list includes a $60 “Welcome to APT” event, a $220 Head Hunter event, and the equally anticipated $2,500 PokerAce High Rollers. There will also be a couple of Freezeout tournaments with buy-ins ranging from $220 to $440, a couple of $110 Deep Stack Turbo events, and finally, a $220 6-Handed Event.

Now that 2012 is a little over three months away from concluding, the Asian Poker Tour’s highly popular Asian Series is also set to have it’s final event. And what better place to do it than hitting up Cambodia, a country that may not have the cache as a poker hotbed, but is increasing in popularity as we speak.

For those traveling to Cambodia to play in the final leg of the APT’s Asian Series and will come from Ho Chi Minh in Vietnam, the casino is approximately 1.5 hours away from the airport. On the other hand, if you’re flying in from the Pnom Penh Airport in Cambodia, travel time will be about 2.5 hours.