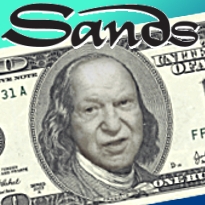 Following the path laid down by its Nevada rivals, casino operator Las Vegas Sands Corp. (LVS) reported a 1.1% drop in net income in Q3 2011. Mind you, LVS still generated net income of $349.8m, which neither MGM Resorts nor Caesars would complain about. Revenue was up 12.5% to $2.71b, but low hold on table games at Marina Bay Sands in Singapore and costs associated with the recent opening of the second phase of Sands Cotai Central in Macau caused a 5.1% fall in earnings to $876.9m.

Lest we forget, LVS’ operations in Las Vegas produced a 38% boost in casino revenues to $171.5m, thanks to an 8.5% increase in table games volume and a 7.7 point increase in table games win. Slots handle was up 1.7% while hold was unchanged at 8.7%. In Pennsylvania, Sands Bethlehem generated net revenue of $122m thanks to a 24.4% boost in table game turnover and a 1.7 point improvement in table win. LVS is currently sitting on $3.75b in cash while holding $9.5b in total debt.

We’d be remiss if we didn’t mention LVS made a stellar showing on Newsweek’s Green Rankings, the list that grades 500 publicly traded US companies on their environmental footprint. From #238 in 2011, LVS has risen to #128 – the biggest positive mover on the new list. LVS exec director of sustainability Katarina Tesarova credited the rise to the over 140 sustainability initiatives implemented over the past year, but frankly, we suspect Newsweek just got confused by all that ‘green’ the company keeps generating every fiscal quarter.