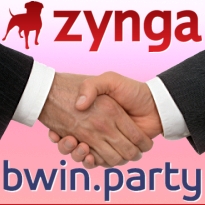 Social games developer Zynga will team with pan-European gambling operator Bwin.party digital entertainment on a real-money UK-facing gambling business. The deal, which was announced Wednesday along with Zynga’s Q3 earnings report, will see Zynga launch a real-money poker site that will share liquidity with bwin.party’s dot-com poker operations, effectively making Zynga a PartyPoker skin. Zynga’s real-money poker offering will be “powered by the established operating platform, software and related support of bwin.party.” In exchange for feeding its fish into the Party pool, Zynga will be provided with a suite of 180 real-money casino games, and the company is also promising the debut of a new Farmville-branded slots game. Zynga’s new service will operate using bwin.party’s Gibraltar gaming license and is set to launch in the first half of 2013.

Zynga also announced it would use $200m of its $1.5b cash on hand to buy back its own stock (why not, now that it’s trading at a 75% discount). The company is embarking on a cost-cutting program – including laying off 5% of its workforce and reducing spending on advertising, data hosting and outside services – that is expected to save them up to $20m in Q4. Before the earnings report was released, Zynga shares briefly touched $2.10, a new all-time low. Since the earnings report and the news of the new real-money gambling revenue stream, Zynga’s shares have gone on a rare upward trajectory, gaining over 10% in after-hours trading.