It’s hard to imagine nowadays, but back on Jan. 20, 2013, some people expressed genuine surprise when President Mitt Romney used his inaugural address to announce his intention to become America’s first ‘gambling president’. Other folks did a double-take during the inaugural gala, when Mitt chose Kenny Rogers’ The Gambler for his first dance with wife Ann. Eyebrows arched higher still when Mitt chose Elvis Presley’s Viva Las Vegas and Motorhead’s Ace of Spades for the first dances with his two previously undisclosed sister-wives, Beulah Romney and Marie Osmond-Romney.

Mitt’s about-face on the gambling issue wasn’t totally unanticipated. The new Bettor-In-Chief had publicly opposed any expansion of gambling for years – longer than he’d held the same position on any other policy question – so you know he was positively itching to flip that pancake already. But this was less of a flip-flop and more of the guy just getting sick of having to hide who he is. Mitt had always loved gambling. All those hedge fund guys did. Mitt briefly let the mask slip during that 2011 GOP primary debate when he (a little too eagerly) challenged Texas Gov. Rick Perry to back up a claim with a $10k wager. A year before that, Romney’s robber baron firm Bain Capital acquired online gambling payment processor WorldPay. Romney maintained that he’d stepped away from Bain’s controls long before WorldPay came into the picture, but that doesn’t mean Mitt stopped taking his cut of Bain’s booty.

Mitt was definitely calling the shots at Bain in Q1 1999, the year the firm announced it had invested $29m in GTECH Holdings Corp. The lottery operator had only just announced the formation of a new division to extend its reach into cyberspace, which proved Mitt didn’t just support gambling; he supported online gambling. Especially lotteries, whose clientele were drawn predominantly from the lower socio-economic strata (the infamous ‘47%’). In Mitt’s mind, state lotteries were one way of ensuring those bone-idle bastards paid at least something in taxes. 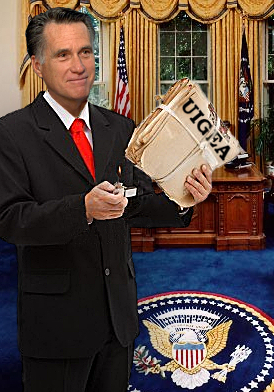 ROMNEY LETS IT RIDE
Day 1 of President Romney’s administration was a blizzard of emergency proclamations, including the repeal of the UIGEA, the IGBA, the Wire Act, PASPA, a couple Constitutional amendments and the infield fly rule. Romney said gambling had always been a state-level decision, so he’d be okay with whatever any state chose to do. Romney also instructed the Department of Justice to drop all charges against international online gambling companies and commuted the sentences of all those individuals who were then doing time. (Except for Ray Bitar, as Mitt was still super pissed about never receiving that hoodie he’d ordered from the Full Tilt Poker store in March 2011).

Within a month, several states passed their own online gambling legislation and began issuing licenses. The first of these went to AdelSchein Inc., the joint venture of PokerStars and Las Vegas Sands. (Sands chairman and major GOP donor Sheldon Adelson, another former public opponent of online gambling, explained his conversion on the issue thusly: “If it’s inevitable, then I want to be the one who controls it so I know kids will be safe. Besides, I spent $100m getting the schmuck elected. I shouldn’t get paid?”) Operating under Stars’ new Full Tilt Poker brand with its much-loved software and Adelson’s hefty bankroll behind a massive marketing campaign, the company quickly became the market leader in online poker, casino, bingo, sports betting, horse racing, mumblety-peg and dominoes.

The American Gaming Association cried foul over Stars’ presence in the US market, citing it as an example of the regulatory ‘race to the bottom’ they’d always warned about. CEO Frank Fahrenkopf dryly observed that the US market had more ‘bad actors’ than a Mexican soap opera. Jim Murren, whose MGM Resorts had partnered with Bwin.party on an online poker JV, publicly chastised the District of Columbia for its refusal to include in its online gambling legislation a clause barring any company that served US residents after Dec. 31, 2006 (informally known as the ‘Date by Which We’re Reasonably Confident Jim Ryan‘s Name No Longer Appears on the Excapsa/Ultimate Poker Payroll’ clause). 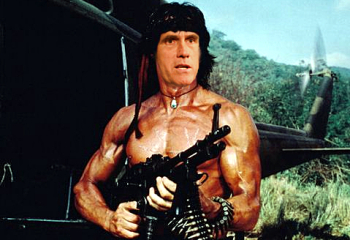 NEW WORLD TO ORDER
While Romney had made it rain for gambling folks, even they wondered what they’d signed up for when Mitt simultaneously declared war against both Antigua and Cuba. But America soon calmed the fuck down when they realized Antigua’s quick surrender had neatly resolved America’s embarrassing World Trade Organization obligations. Cuba held out a little longer, but following a week of drone strikes and a cyber attack that redirected every link on Cuba’s internet to a Rickroll, they hoisted an off-white flag. This was later revealed to be Raul Castro’s soiled tightie-whities, which Romney had framed and sold on eBay to help offset war costs. (It was purchased by Genting US, who hung it in the foyer of the new Resorts World Miami.)

Within a month of the president’s victory speech from the steps of the New York stock exchange, Romney allowed 1m Cubans (cigars, not citizens) to emigrate to the US, then forcibly deported some 11m Cubans (citizens, not cigars) to Venezuela. Once Cuba was depopulated and reno-ready, Mitt gave the island to China in exchange for eliminating a good chunk of America’s debt obligations. 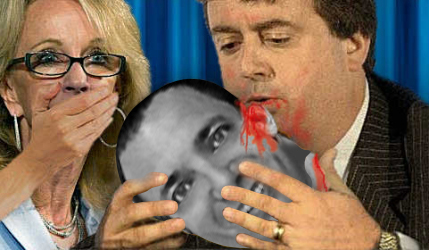 Impressive as that feat was, Mitt’s true genius lay in retaining ownership of the US naval base at Guantanamo Bay. Once 50m wealthy and gambling-mad Chinese emigrés had taken up residence in China’s new ‘special administrative region’, Mitt rebranded the naval base as Git Mo’ and issued gaming licenses to a lucky few resort casino interests.

Incredibly, Caesars Entertainment declined to apply for one of these casino licenses, a decision CEO Gary Loveman subsequently referred to as “a big mistake. Not as dumb as my 2006 decision not to apply for a Macau casino license, but yeah, pretty fucking stupid.” We’ll never know whether it was this latest gaffe – or the belated realization that online poker couldn’t prevent Caesars’ debt from topping that psychological barrier of $50b – that prompted Loveman’s extremely unfortunate decision to ingest those ‘bath salts’ the morning of Caesars 2014 AGM. None of us will ever truly be able to forget that terrible image of Loveman biting off the head of poor Caesars Interactive boss Mitch Garber in front of a horrified Jan Jones and a room full of equally shocked shareholders and analysts.

DOES MITT DESERVE A SECOND TERM?
Of course, having a gambling president wasn’t all gravy. Who could forget the infamous 2015 G8 summit, when Mitt lost Alaska to Russia on a game of ‘rock, paper, scissors’ with Tsar Putin the Terrible? The only Alaskan smiling over that doozey was former governor Sarah Palin, who promptly embarked on a media tour touting the belated reality of her claim to be able to see Russia from her house. 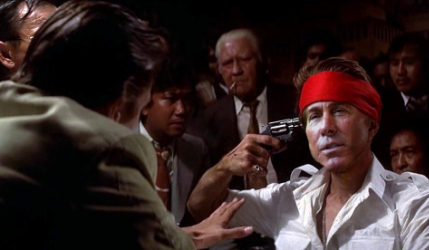 Romney has also so far failed to convince Vietnam to release Wynn Resorts CEO Steve Wynn. It’s been a year since Wynn and Zynga CEO Mark Pincus were unceremoniously dragged off a plane in Hanoi to face charges that their Nevada-licensed online gambling joint venture had illegally offered services to Vietnamese residents. Wynn has reportedly spent most of the year on Vietnam’s infamous ‘didi mao’ Russian roulette prison circuit, but the feisty casino titan appears too tough to die. (Sadly, the same could not be said for Pincus, who accidentally shot himself before his first game of roulette even started, apparently convinced the gun contained ‘virtual’ bullets.) That said, Wynn’s luck won’t hold forever, especially with Kazuo Okada using his Entertainment City Manila casino profits to pay challengers big bucks to sit across the table from his former Wynn Resorts partner. So what is Romney waiting for?

Whatever Romney’s shortcomings, online gambling companies are clearly stoked by reports of Mitt’s plan to privatize social security. According to the leaked draft of the Betting On America Act, senior citizens’ monthly benefits would be replaced by a one-time lump-sum payment in the form of deposits with US gambling sites (subject to 5x rollover requirements). Before any of you soft-hearted liberal lefties get your panties in a wad, the legislation clearly states that any unlucky seniors who blow their nest egg on an ill-advised spin of the roulette wheel will automatically qualify for the government’s new ‘Soylent Green’ food assistance program. (‘Now with 47% more flavor!’) So everybody wins. Four more years! Four more years!