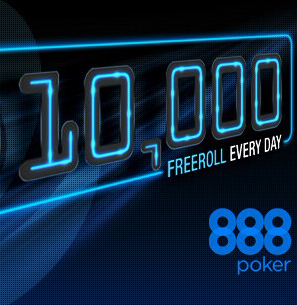 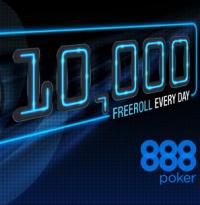 40 million tournaments. That’s how many 888poker has hosted since it went live. To commemorate their milestone, the online poker site kicked off a unique promotion wherein they’ll be running a $10,000 freeroll every day for the next 30 days.

888poker is promising that all players, even new ones who have just registered on the site and have yet to deposit funds, will be give a chance to compete in at least two of the daily freerolls. But for those who deposit even the $10, 888poker will allocate another five tournament tickets, increasing that total to seven tickets on any one of the 30 $10,000 freerolls to be played in the next 30 days.

As far as existing players are concerned, they get dibs on two free tournament tickets while also getting an opportunity to win up to 28 more tickets should they successfully beat 888poker’s daily challenge.

It appears that 888poker is feeling mighty generous with this new promotion, and they’re even giving out $8 – $6 in tournament tickets and $2 in cash games – in free funds to any new members, although this promotion is limited to new players from only a handful of countries. Check your country of residency and if you’re from any one of these countries – the United Kingdom, Spain, Germany, Austria, Switzerland, New Zealand, Australia, Ireland, Greece, Netherlands, South Africa, Canada, Sweden, Norway, Lebanon, Japan, Kuwait, Cyprus, Luxembourg, Malta and Finland – you stand to gain those $8 in free funds.

Taking into account the $10,000 everyday freeroll, 888poker will be giving away a grand total of $300,000 for the entire duration of the promotion. That’s a whole lot of money to be giving away, but since 888poker is considering 40 million tournaments as a landmark achievement – it is, in our opinion – then by all means, they’re within their rights to drop all that money for its players.

Besides, who wouldn’t want the opportunity to cash in big on a daily freeroll?