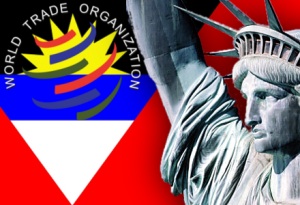 Sources have told CalvinAyre.com that the long-simmering trade war between Antigua and the United States is about to go thermonuclear. For those of you who’ve been under a rock for the past decade, here’s the Cliffs: Antigua believed the US effort to prevent Antigua-licensed online gambling companies from offering services to US punters was in violation of international trade law. In 2005, a World Trade Organization (WTO) appellate body agreed, and told the US to either shut down its domestic online horse betting operations or allow Antigua equal access. Instead, America chose ‘none of the above’ and in 2007 the WTO ruled Antigua was owed an annual $21m in compensatory damages. If the US refused to pay, the WTO authorized Antigua to collect by other means, such as disregarding US copyrights to a value equal to the annual damages owed.

Up to this point, Antigua had declined this nuclear option, hoping against hope that America would bow to reason at the negotiating table, but Antigua has apparently decided the time for talk is over. Contacted by CalvinAyre.com, neither Antigua’s government nor its lead attorney in the WTO dispute, Mark Mendel, would confirm nor deny the story, but our sources say it’s only a matter of time before details of the nation’s legal strategy are revealed, and CalvinAyre.com will be the first to bring them to you.

In April, Mendel told CalvinAyre.com the US had up to this point “simply ignored” the nation’s good-faith efforts to bring about a satisfactory conclusion to the dispute. If Antigua was trying to get America’s attention, this is the right way to do it, given that it often appears America’s trade policy is run by entertainment conglomerates hell bent on punishing individuals and groups that have facilitated the unauthorized spread of films, TV shows and music. Having a WTO-sanctioned ‘pirate’ operating openly in the western hemisphere will drive America bonkers, especially in an election year, in which any issue becomes politicized. The current US administration probably doesn’t dare give Antigua what it’s owed for fear of provoking a lot of ‘bowing to foreign powers’ rhetoric from conservatives.

However, if Antigua’s actions mean the US is forced to belatedly acknowledge the legitimacy of the WTO ruling and admit that its actions against international online gambling operators were not in accordance with international trade obligations, what does this mean for the ongoing prosecutions against some of these operators? After all, if Howard Lederer can seek to use the Dicristina ruling to his advantage, might there not be some spin-off benefits from Antigua’s victory? Stay tuned…