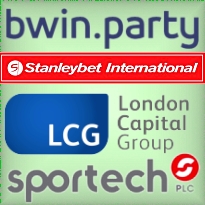 Just a day after we jokingly depicted PokerStars’ founder Isai ‘Highlander’ Scheinberg attacking Bwin.party co-CEO Jim Ryan with a katana, financial analysts at Citigroup drew their own knives and started hacking away at Ryan’s company. On Wednesday, Citigroup’s London-based James Ainley issued a ‘sell’ rating on Bwin.party, citing the negative effects of incremental taxes and a probable exit from the German poker and casino market. While Citigroup anticipates Bwin.party’s much-desired entry into a regulated US online poker market will take place on a state-by-state basis beginning early in 2013, Citigroup “expects competition to be intense,” and thus the revenue reality likely won’t resemble the gravy train Bwin.party investors have been promised. Ainley set a target price of 88p on the stock. Bwin.party closed out Thursday’s trading at a new low of 95.35p (-1.7%), having lost nearly 5% in the two days since Citigroup issued its verdict.

Liverpool-based private operator Stanleybet International, which operates over 2,000 betting shops across Europe, reported a £10m pre-tax profit in 2011, a sharp turnaround from the £822k loss the company reported in 2010. The profit is all the more impressive considering turnover fell from £430m in 2010 to £385m in 2011, but “better trading results and a reduction in exceptional administrative expenses” helped matters. (The 2010 numbers were dragged down by a one-time £6.75m charge relating to a legal dispute with the estate of Lord Steinberg, founder of Stanley Leisure, the company from which Stanleybet was spun out.) While Stanleybet is primarily a retail operation, CEO David Purvis told the Liverpool Daily Post the company has been “working for about 12 months preparing for egaming … we will have a soft launch in the last quarter of this year … in a couple of counties. By 2013, I think we will see a transformation, particularly in turnover levels.” Stanleybet recently renewed its legal war with Italy over the country’s latest bet shop tender, which Stanleybet maintains provides an “unlawful advantage” to incumbent operators.

UK-based pools and tote betting operator Sportech says pre-tax profits for the first six months of 2012 were £3.2m, down from £3.7m the previous year. Blame for the shortfall goes to a £1m exceptional charge for restructuring and redundancy expenses. Turnover for the period rose slightly to £57.7m (from £57.4m) while earnings also inched upward to £12.6m (from £12.4m). Sportech’s 2010 acquisition of the Scientific Games Racing business (rechristened as Sportech Racing) is looking like a shrewd move, as CEO Ian Penrose says America now provides “more than 30%” of Sportech’s profits. Penrose expects its US operations to become “increasingly important” in future years. Sportech’s online casino and poker operations saw the number of active players fall from 19.2k to 16.6k, but first-time depositors tripled to 6k, producing a 30% boost in gross win revenues to £2.6m. The company also reduced its net bank debt by 10% in H1.

Spread betting outfit London Capital Group (LCG) recorded stable revenues of £18.41m in H1 2012, but pre-tax profits plunged to £150k from £2.7m in 2011, thanks to the need to set aside an additional £1.9m for compensation claims relating to customer rebating errors on one of LCG’s foreign exchange platforms. LCG has now put aside a total of £5.1m to deal with compensation claims relating to its handling of Integrity Financial Solutions managed currency accounts. Some 25% of complainants have settled with LCG, representing a total £750k of its outstanding liability. LCG’s core UK spread betting operations provided two-thirds of group revenue, while adding six new white label clients in H1, including Victor Chandler.