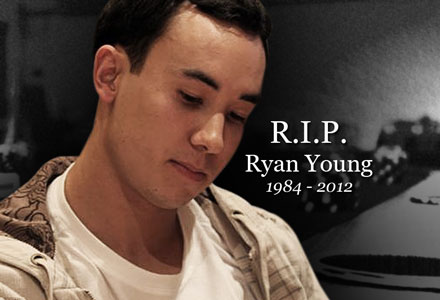 The poker world is in mourning today after professional poker player Ryan Young unexpectedly passed away after being involved in a car accident, according to numerous sources. Young was 28.

The news of Young’s passing was initially announced by Daniel “Kid Poker” Negreanu who broke the news on his Twitter account, @RealKidPoker:

“Really sad news: Poker Pro Ryan Young passed away today. Kid was a character, played with him in the main event this year. RIP Ryan…”

Negreanu followed that up by adding: “A real loss for the poker world. Ryan Young was interesting, charismatic, a talker, aggressive, and exciting to watch. I liked him.

No official details have been divulged regarding the accident and how it led to Young’s death, but whatever the case may be, it’s an unfortunate and untimely passing of one of the game’s bright young stars.

Following Negreanu’s news, a number of poker players also took to Twitter to express their thoughts on Young’s passing.

From Matt Savage (@SavagePoker): “So sad to hear about Ryan Young, he was ALWAYS a pleasure to have at my events.”

Chris Moore (@gcnmoo): “very saddened to hear of the passing of poker player ryan young. Always thought of him as a great player, and an even better guy :(” #rip

Vanessa Selbst (@VanessaSelbst): “I’m also incredibly sad about Ryan Young’s passing. He was a treat to play with—such a vibrant, good-natured kid. Too young for that. RIP.”

Sharing the sentiments of the poker pros, we’re deeply saddened about Ryan’s passing. Things like this is something nobody can prepare for and when it happens, it hits all of us deep. Our thoughts and prayers are with his entire family as they go through what we can only imagine to be such a traumatic ordeal.

Rest in Peace, Ryan. Godspeed on your next journey.