The Importance of 4G for iGaming 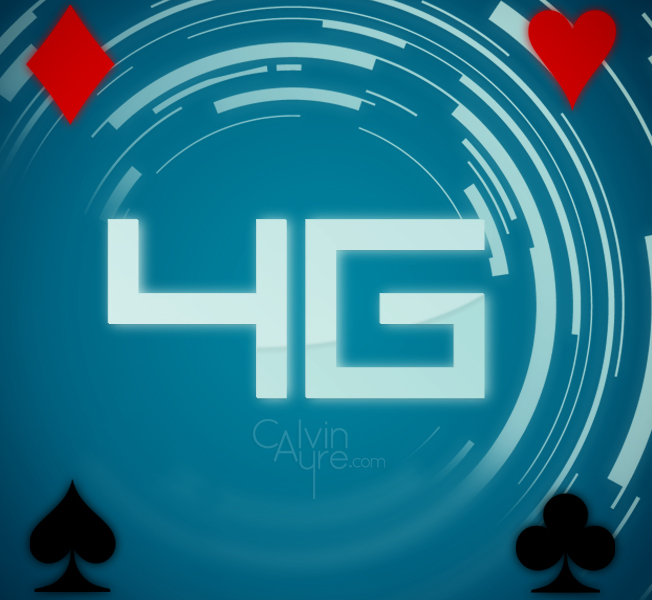 As far as the biggest opportunities in iGaming go, you have to be pretty misinformed to not think that mobile is pretty much the largest of the lot. We’ve all seen the figures showing that mobile devices and tablets continue to catch up on desktop computers as well as the predictions of when almost our entire markets will be mobile.

Just to stimulate the minds of those who are still to take mobile seriously, here are just two of the more important headline statistics being bandied around.

In 2014 mobile internet users will overtake desktop internet users with that gap expected to continue increasing thereafter. By 2016 there will be 10billion mobile devices for 7.3billion users.

It’s figures like these that have forced the hand of many online companies to ensure that they can cater to screen resolutions of all sizes. The iGaming industry has acted reasonably swiftly, which is the very least that you would expect from an industry that prides itself on being innovative.

As fast as the hardware for the devices themselves is improving, the software being created to run on them is also constantly being bettered. This has even extended into the mobile iGaming industry where the issue of compatibility loomed large for some time.

Fortunately this has now been put to bed thanks to HTML5. April saw Microgaming convert a number of their biggest mobile games including Tomb Raider and Thunderstruck onto the HTML5 format and others are following suit.

So we’ve got the hardware to display beautiful, slick images and graphics. The software is there to enable this to take place but in many key iGaming markets, there’s still one very important component missing – connectivity.

While desktop users are plugged into the wall or perhaps in the next room to their wireless router, mobile users are everywhere. It’s this fact that makes the mobile market so potentially lucrative yet is proving to be a stumbling block for many iGaming operators. What’s worse is that it’s more or less completely beyond their control.

4G Britain – a campaign which pretty much does what it says on the tin – produced a map of the world highlighting the countries that were 4G enabled. Among many that you would expect to be there were some notable omissions and some very surprising additions.

Countries to have 4G include; USA, Canada, Australia, India, Russia, Saudi Arabia, Germany, Norway, Sweden, Uzbekistan and Angola. Yes, that right. While the likes of China and the United Kingdom are yet to get on the 4G bandwagon, Uzbekistan and Angola are happily rolling along with far superior mobile connectivity.

‘There must be a reason for this’, you say. ‘Perhaps, 4G isn’t all it’s cracked up to be’. Well, before you head down that road, consider some of the following statistics regarding its potential impact on the UK.

The headline is that it’s been predicted that 4G would instigate a £7.5billion increase in GDP. Workers could save 37 million hours every year. More than 115,000 jobs would be created or safeguarding as a result.

Now, the interesting bit for iGaming operators is that 4G downloads are up to 20 times faster than 3G. Examples of this difference in speed put forward by 4G Britain are that a feature film which would now take an hour to download could be completed in ten minutes and a full music could be got in less than a minute.

For everyone this means a far better service. It means that marketing promises of being able to play anywhere from your mobile become much more genuine. That people playing casino games on buses and while being dragged around shopping centres could actually do so with much more ease. Unfortunately, for those of us in the connection-developing countries, we currently rely on a WiFi connection to be able to partake in such activities.

The Importance of Speed

Speaking specifically about iGaming operators, the main issue that connectivity affects is their mobile retention. You can draw in all the customers you like with screenshots of great looking games, generous bonuses and big jackpots but they aren’t going to stay if it takes them ten minutes to complete a slots spin or a hand of blackjack.

Despite this, in Britain the support from the iGaming industry for the introduction of 4G remains almost non-existent. Of the many operators that face the UK market, none have signed up to support 4G Britain. So while companies such as Addison Lee, Getty Images and others push for better mobile connections, iGaming companies that rely on internet connections are yet to show their support.

Of course, there’s the possibility that showcasing how 4G connectivity will get more people gambling more often will do more harm than good. If this is the case then it’s understandable that gambling companies themselves are reluctant to come out and make statements directly. However, this same reason doesn’t stop them commisioning or conducting research into the economic and social effects of 4G.

But despite the lack of lobbying from gambling companies the good news is that the UK will be getting 4G sooner than was anticipated. Some have even suggested that a 4G network may be introduced in 2012. However, while hardware is available, many devices and handsets currently out there won’t be able to use the British 4G as it will be on a different frequency. The iPad for example, has a 4G aerial but won’t necessarily work with a British 4G network once it’s launched.

In contrast, the government in China are taking the opposite approach. A representative of the Ministry of Industry and Information Technology revealed in March that 4G licenses weren’t going to be issued for at least another two years. Rather than creating the network immediately, the Chinese approach will focus on ensuring that almost all devices are able to support a 4G network by the time it launches.

Regardless of the reason, the overiding fact is that iGaming operators in the UK and China are going to have to bide their time when it comes to 4G. But they should certainly be ensuring that once it is ready to go, they have the products to keep customers calling.