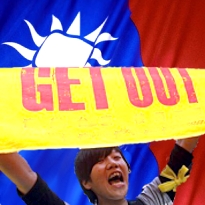 Emotions are heating up as Taiwan’s Lienchiang County prepares for a July 7 referendum on whether or not to permit a resort casino to be built on the outlying Matsu islands. County Commissioner Yang Sui-sheng is strongly backing a ‘yes’ vote, believing that casinos will bring badly needed transportation infrastructure to the region, which will (literally) smooth the path for increased tourist traffic. But on Wednesday, an anti-gambling group filed a complaint with the Supreme Prosecutors Office Special Investigation Division, accusing Yang of conspiring with one of the companies vying for the casino concession to trick County residents into voting ‘yes’. The complaint also accuses Weidner Resorts Taiwan, the company Yang allegedly colluded with, of making fraudulent claims.

In the complaint, Ho Tsung-hsun, the exec director of the Alliance Against the Legalization of Gambling, cited reports in Next Magazine that Yang had participated in promotional events sponsored by Weidner Resorts, which has expressed interest in building a casino on Beigan Island (part of the Matsu group). At these events, prizes such as iPads, cameras and stereos were reportedly handed out to attendees, which Ho says is a violation of the 30 Taiwan dollar (US $1) limit on promotional giveaways during election activities. Ho also claims that Yang and other government employees handed out pro-casino literature to attendees, something Ho finds objectionable because “the county government should be neutral on the issue.”

Weidner Resorts, which is run by former Las Vegas Sands president/COO William P. Weidner, has promised to build an international airport on the site, as well as a causeway linking Beigan to the nearby island of Nangan. Weidner is also chairman/CEO of Global Gaming Asset Management, the joint venture of Cantor Fitzgerald and former Sands execs, which is teaming with Bloomberry Resorts on its Solaire Manila resort casino.

But the Alliance’s Ho claims Weidner Resorts is “misleading” voters by painting itself as having developed casino projects in the United States, Singapore and Macau, when those developments were Sands’ babies, not Weidner’s. As such, Ho says Weidner’s claims amount to fraud and Weidner’s infrastructure promises are “bad checks.” Ho is also gathering allies for his anti-casino cause; the Citizen Congress Watch group has announced it is heading for the Matsu region to observe the goings-on in the 10 days leading up to the referendum. The group’s exec director, Chang Hung-lin, said the idea of relying on casinos to develop the region is a “suicidal act.” Well, so long as you’re keeping an open mind about it…

Even Taiwan’s Culture Minister has weighed into the fray, pleading for both sides of the debate to keep their cool. On a recent trip to Matsu, Lung Ying-tai told Taiwan’s Central News Agency that she didn’t believe the construction of casinos automatically destroyed a region’s cultural landscape. “People should not demonize gambling without any investigation.”