Home / Business / Who is torching OPAP betting shops in Cyprus and why? 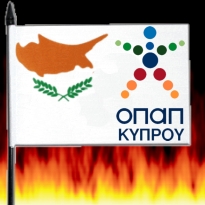 Betting shops operated by Greek betting giant OPAP are under sustained attack on the island of Cyprus. Over the past two weeks, arsonists torched four shops and tried to torch three more, while OPAP’s central office was hit by drive-by gunfire early Friday morning. OPAP officials have requested that the state provide security at its 120 properties across the island, and the Cyprus Mail quoted Justice Minister Loucas Louca saying the police were taking undisclosed measures to deal with the threat. A 45-year-old man was detained on Friday, but was released due to lack of evidence. Police later announced that based on “evidence and an evaluation of information, there is a specific direction to the investigations.”

Most observers believe the attacks are related to the Cypriot government’s ongoing efforts to pass online gambling legislation that appears to offer OPAP a de facto monopoly. The legislation calls for legal online sports betting and lottery games – which OPAP offers – but no poker, slots or table games; nothing in which the player actually plays the game over the internet. The bill has been hanging around parliament for some time now, and everyone from international online gambling companies to opposition politicians has criticized the legislation as too tilted in OPAP’s favor. Last April, a member of the opposition told Parliament that he, unlike members backing this bill, “couldn’t be bought by anyone,” a breach of parliamentary decorum that prompted a walkout by some MPs.

OPAP officials are playing down any connection between the attacks and the pending legislation. OPAP Cyprus general director Michalis Himonas said the bill “concerns state and illegal betting facilities. There is no reason to target OPAP.” Whatever the intentions of the OPAP haters, the bill’s parliamentary backers say the attacks won’t deter them from pushing the online gambling bill forward, unaltered. House Legal Affairs Committee MP Ionas Nicolaou said the government “will do what we have already judged serves the interest of the state and we won’t be influenced.”

But just as Irish legislators delayed implementation of their nation’s online gambling reforms due to more pressing economic concerns, Cypriot statesmen are distracted by the urgent need to recapitalize the nation’s banks due to their overexposure to toxic Greek loans. Assuming the nation survives that crisis, politicians may next find themselves distracted by the presidential election scheduled for February. In the meantime, OPAP agents are hoping it isn’t a long hot summer.