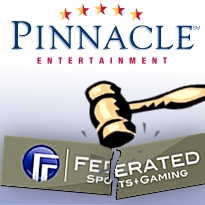 Bankruptcy court documents stemming from Wednesday’s asset auction of Federated Sports + Gaming (FS+G) — the failed parent company of the Heartland Poker Tour (HPT) and the Epic Poker League (EPL) – indicate that the winning bids were put in by US casino operator Pinnacle Entertainment Inc. FS+G went tits up in February after only about a year in existence, with about $17k in the bank and around $8m in debt. Pinnacle reportedly made the highest bid of $4.2m to acquire the HPT, picking up FS+G’s remaining assets – including the Global Poker Index, the dormant EPL franchise and a bunch of domain names – with a $300k credit bid.

But there’s a fly in the ointment. When FS+G couldn’t make the payments on its June 2011 purchase of HPT from All In Productions (AIP), FS+G borrowed $2m from Pinnacle and gave half to HPT in January 2012. But FS+G went belly up the very next month, leaving Pinnacle out $2.1m, AIP still owed close to $2m and about 100 other creditors, including the Disabled Veterans of America (stay classy, FS+G). Now that the auction is over, the Official Committee of Unsecured Creditors has filed an objection to AIP’s status as a secured creditor and demanded a hold on any proceeds from the auction going to AIP. (Read the objection here.)

The Committee is composed of 441 Productions, the EPL’s TV production team; digital agency Digitaria Interactive; Savage Tournaments, led by former EPL tournament director Matt Savage; and Satellite Broadcasting Inc. Their filing argues that FS+G was essentially insolvent after it acquired the HPT, making that $1m payment to AIP in January a fraudulent transfer under Section 548 of the Bankruptcy Code. The Committee also believes AIP’s claim should be disallowed because the due date for AIP to submit proof of the legitimacy of its claim was June 25, i.e. not until after the auction had concluded.

Leaving aside the question of where exactly AIP stands in the creditor queue, we’re still in the dark as to what Pinnacle has planned for the HPT. Whatever happens, it’s hard to imagine the EPL having much of a future. The ‘Epic Fail’ jokes began early: paltry fields at its events; the debt controversy that prompted the EPL to put the winner of its inaugural event on probation, followed by the decision to turf a sex offender from their second tournament, refusing to refund the $20k main event seat he’d rightfully earned via a satellite event and leaving the Palms Casino Resort to make things right. Let’s all take a moment to recall Daniel Negreanu’s rather prescient sniping from the sidelines last August about the EPL’s “fundamentally flawed” financial structure.