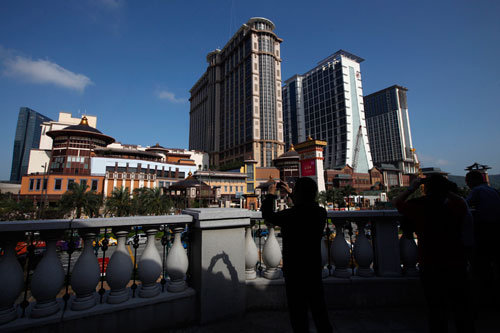 Sands Cotai Central accounted for more than half of the company’s visitor total on its opening day. Sands China’s three other venues – Sands Macao, Venetian Macao, Plaza Macao – and the new site saw 200,000 visitors according to a company statement. Of those, 84,000 went to Sands Cotai Central from when it opened at 6pm and this included queues stretching 400 metres around the Conrad Macao ahead of the opening celebration. The figures go to back up various analysts getting excited about the opening and the effect it will have on gross gaming revenues.

Bank of China has increased its target price for Wynn Macau. Equity analyst Edwin Fan reports the target price is up to HK$21.80 (US$2.80) per share and the bank raised its expectation from “sell” to “hold”.

Increasing numbers of Australian tourists are flocking to Macau to sample some of the enclave’s gaming industry delights. March saw the amount of visitors increase by 20 percent from 8,343 last year to 9,994 this year. Q1 saw an increase of 15 percent to 31,731, according to figures from the Macau Government Tourist Office. The total amount of visitors to the enclave has already hit 28 million in 2012.

Macau’s Public Prosecutions Office is reporting crimes involving casino business croupiers are increasing. A press release gave the news and added that croupiers should “maintain their professional integrity in order to avoid irreversible mistakes.” It comes after a fresh case involving four people was uncovered, one of the defendants a croupier that is a native of Macau.