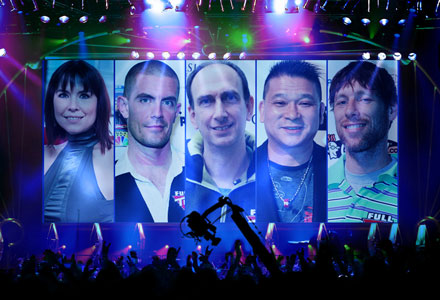 If you ever find yourself winning a million dollars playing poker tournaments, chances are you’ll have done it the hard way: by beating a field of at least several hundred players, all of whom either put up their own money or won a satellite tournament. Before Black Friday rolled around, there was another road to big wins for some other players: the made-for-television event. A handful of players have crossed the seven-figure threshold over the years, proving that playing poker for the cameras is great work if you can get it.

Annie Duke’s $4.27 million in career tournament earnings rank her third all-time among women. Perhaps a little surprisingly, nearly half of that total came as the result of a single-table sit-and-go – albeit against some pretty tough competition.

In 2004, Duke won the inaugural WSOP Tournament of Champions. The invitation-only, winner-take-all event saw Duke outlast eight of the top players of the day, including Chip Reese, Phil Ivey, Daniel Negreanu, and Duke’s brother, Howard Lederer, to face off against Phil Hellmuth in the heads-up duel. Hellmuth came unglued for ESPN’s cameras in classic fashion, while Duke claimed the unprecedented (and since unmatched) $2,000,000 prize.

Six years later, in 2010, Duke would showcase her one-on-one skills for the cameras again. This time they belonged to NBC and the tournament was the network’s glitzy Heads-Up Poker Championship. After having been knocked out in the first round by comedian Brad Garrett the previous year, Duke was on a mission. After getting past Andy Bloch in the first round, she drew and won matches with 2009 WSOP Main Event runner-up Darvin Moon, 2007 NBC Heads-Up champ Paul Wasicka, 2007 WSOP Main Event winner Jerry Yang, and 2008 WSOP Main Event runner-up Dennis Phillips. Despite taking on an entirely different caliber of poker player than her previous opponents when she faced Erik Seidel in the final, Duke triumphed to take home $500,000.

Not many players have appeared on as many made-for-TV poker broadcasts as the aggressive man from Denmark known as “The Great Dane” – and fewer have turned those appearances into big piles of cash the way he has.

The original Poker SuperStars Invitational was filmed in early 2005 and broadcast on FOX Sports. It featured Hansen, Johnny Chan, Phil Ivey, TJ Cloutier, Chip Reese, Howard Lederer, Doyle Brunson and Barry Greenstein. Each man put up a $400,000 entry fee, then the largest of all-time, and played a series of no-limit hold’em tournaments. The results of those determined chip counts for a further series of no-limit hold’em tournaments, which were used to determine chip counts for an ultimate no-limit hold’em tournament, the Grand Final. (And since this was 2005, the producers included a segment in every one of those tournaments explaining “how to play Texas Hold’em.”) At the end of the Grand Final Hansen was the last man standing, winning a cool $1 million.

In 2010, Hansen added another big TV win to his list of tournament successes with a victory in ninth installment of Sky Sports’ Poker Million. The field he had to overcome was significantly bigger at 48, but the payout after he defeated Tony Bloom heads-up was exactly the same: $1 million. Together with his Poker SuperStars win, high finishes on Late Night Poker and the NBC Heads-Up Poker Championship, and a few assorted early-season WPT filler events, that Poker Million win makes Gus Hansen one of the winningest players ever in made-for-TV events.

Erik Seidel has won a lot of tournaments over the years, but he’s also racked up a lot of second-place finishes. There was, of course, the 1988 WSOP Main Event, made famous in Rounders. In the 2000s he also finished second at Jack Binion’s World Poker Open, the US Poker Championship, and the Aussie Millions Main Event. So when Seidel met Annie Duke in the final of the 2010 NBC Heads-Up Championship he was no stranger to taking home the smaller of the final two prizes. He lost the best-of-three final to Duke 1-2, but the $250,000 runner-up prize was fine consolation.

By itself that wouldn’t really be enough to make note of. But the next year, Seidel would work his way through another tough roster of players to reach the final. He defeated Allen Cunningham, Jennifer Harman, Phil Gordon, Vanessa Selbst and Andrew Robl en route to an ultimate matchup with 2003 WSOP Main Event winner Chris Moneymaker. Seidel won the match against poker’s living embodiment of the American Dream, securing the tournament-record top prize of $750,000 and making himself an NBC Heads-Up millionaire.

At the dawn of the poker boom, Johnny Chan was already legendary for two things: winning the WSOP Main Event back-to-back, and getting bluffed out of one pot against Matt Damon’s character in Rounders. He was as marketable a player as there was in poker, so Chan got invitations to all the best made-for-TV events. The 10-time WSOP bracelet winner made the most of them, too.

In the first Poker SuperStars Invitational, he finished second to Gus Hansen and won $750,000 on a $400,000 buy-in. In the second Poker SuperStars series, Chan improved on his performance by winning against a larger field of 24 players. His payout for the win was $400,000, but with cash prizes for wins in a few preliminary rounds his overall take in the second series totaled $515,000 – not bad for a $40,000 buy-in.

Before Black Friday, Chan also appeared six times on Poker After Dark. He won four of those tournaments, the most among all players on the series, and his net gain of $360,000 was the most of any player not named Huck Seed. With more than $1.5 million in winnings from such invitation-only events, Johnny Chan will be looking forward to the day TV networks start producing inexpensive poker programming again.

Like several of the other players on this list, Huck Seed enjoyed great success at the NBC National Heads-Up Championship during that tournament’s seven-year run. During its early seasons he was its most consistent competitor, finishing 9th in 2005, 3rd in 2006, 9th in 2007, and 3rd in 2008 before finally winning the event in 2009 to bring his all-time winnings in the tournament to $800,000.

Seed was one of 20 living WSOP bracelet winners selected by a public vote for inclusion in a 27-player field for the 2010 WSOP Tournament of Champions. He made the most of the freeroll, walking away with $500,000 after defeating Howard Lederer in the heads-up match.

As member of Team Full Tilt, Seed got to play in plenty of that poker room’s sponsored TV events. He scored in a few of the bigger ones, winning a $100,000 buy-in episode of Poker After Dark for $600,000 and taking down the Doubles Poker Championship for $500,000. Even on non-Full Tilt events, Seed was a formidable opponent; in the UK he won one episode of The Poker Lounge and the finals on Late Night Poker in 2009, good together for $320,000. His total earnings on made-for-TV events of more than $2.7 million are the best of all time.