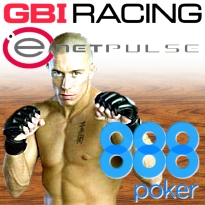 Danish-based tennis live data supplier Enetpulse has inked multi-year deals with betting outfits bet365, Paddy Power and William Hill. The deals will allow the bookies to provide their customers with all the up-to-the-second info involving young men and women grunting loudly in public. Enetpulse entered into an exclusive deal last year with the Association of Tennis Professionals and the Women’s Tennis Association to distribute live scoring data. An Enetpulse spokesman said more deals would be announced in due course.

GBI Racing, which holds exclusive international broadcast rights to 60 racetracks in the UK and 26 in Ireland, has inked deals to bring the best of UK/Irish racing to markets in Denmark and Canada. In Denmark, GBI has teamed up with monopoly betting outfit Danske Spil, which previously only offered wagering on Scandinavian races. In Canada, GBI’s new partner is Woodbine Entertainment Group (WEG), which will offer GBI’s races at WEG’s tracks and also rebroadcast GBI Racing channel product on Horse Player Interactive TV. GBI now has broadcast deals in over 40 territories.

888 Poker has signed mixed martial arts champ Georges St-Pierre as a global brand ambassador. The latest member of Team 888poker will take part in the 2012 World Series of Poker main event, where his table mates will likely be hoping he doesn’t put them in a rear naked choke on his way to the rail. In addition to playing online at 888 and other live poker events, GSP will take part in promotions that raise funds for his charitable foundation, which focuses on anti-bullying efforts.

St-Pierre isn’t the first MMA’er to try his hand on the felt. Mike Swick earned almost $35k for a high finish at a 2010 WSOP event. At a news conference, GSP downplayed expectations of his chances against veteran poker players, although that doesn’t mean he’s not taking this seriously. “When I do things, I want to be the best and I’m very competitive. Over time, I hope to become an excellent player maybe like other good poker players like Guy Laliberte and Rene Angelil.” In the meantime, GSP thinks poker will aid his day-job, from which he’s currently on sabbatical while he rehabs his injured knee. “Maybe in a way, poker is going to help me focus on relaxation and help me rest my body between fights.” Unlike the rest of us, who tend to take out our post-bustout frustrations on the nearest vending machine.