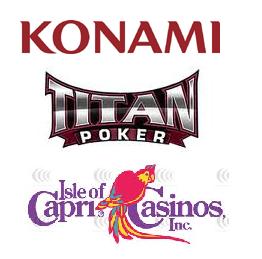 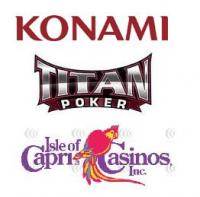 Leech Lake Gaming’s Gaming Director, Jim Morales, said:“Konami has proven to be a trusted business partner who delivers on their promises. In addition to managing our core gaming business processes, KCMS is providing us with the technological innovations and efficiencies we need for continued growth.”

Leech Lake Assistant Gaming Director George Goggleye adde: “For us, customer service is just as important as functionality and with Konami, we get the best of both. We’re leaving a prominent management system largely because of poor service and support. Konami’s commitment to these areas is obvious and factored heavily in our decision to install KCMS.”

After upgrading its poker software earlier this year, highly regarded European poker room, Titanpoker.com, is launching its Lord of the Grind promotion to reward players each month for their achievements at the poker tables and tournaments.

Starting 1 March, players can reach personal targets by earning Titan Poker Points as they play cash games and tournaments. Targets are set in four different levels and indicate the number of Points that must be earned and the number of days on which the minimum Point total must be met.

Players will also be rewarded for achieving their personal targets, with each player receiving the highest reward to which he/she is entitled. Players can receive as much as $250 in monthly rewards for successfully reaching the targets in the Lord of the Grind promotion. The rewards given to players are in addition to the regular benefits they receive through the Club Titan VIP Program.

To participate, Titan Poker states players must opt-in each month on the Titan Poker website.

A press release states the Net Revenues and EBITDA for the third quarter include insurance recoveries received as partial advances to the company’s business interruption claims related to the flooding along the Mississippi River during fiscal 2012 for $0.9 million.

The company’s President and Chief Executive Officer, Virginia McDowell, said: “We posted solid results in our third fiscal quarter.  Specifically, net revenues increased at eleven of our fifteen properties, including each of our properties outside of Mississippi, where the markets have been slow to recover from the flooding last spring and economic issues continue to negatively impact the market.

“We are looking to the future with optimism as we expect to open our Isle property in Cape Girardeau, Missouri by Thanksgiving of this year, subject to regulatory approval, at least a month ahead of our previous schedule.”