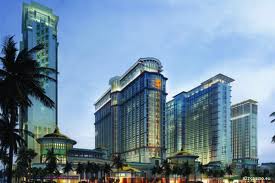 Some might say Cotai – the land between the Taipa and Coloane islands in Macau – is a construction worker’s worst nightmare. Not only have workers died while erecting projects in the past, but yesterday yet another worker died at the site of the Sands Cotai Central casino when he slipped and fell from the 38th floor. A press statement released by Sands China Ltd today reveals how the incident happened after the man installing lights on the building’s exterior. According to reports, he was found dead in the fourth floor pool area.

The statement said: “Sands China and Hsin Chong are cooperating with an investigation underway by the police and the Labour Department to try and ascertain the exact circumstances of the accident.” First guesses? Poor safety regulation…?

In less depressing Macau focused news, SmarTone Telecommunications saw its Macau operations posting a super strong performance for the six months to December. Operations in the Chinese gambling hub saw an operating profit of an amount equal to $5.4 million, up by 163% year-on-year. Revenues also rose, up 35% to $23 million, which a report by Macau Business states, was driven by higher revenue from both local and roaming services.

With the once hidden gem of mobile iGaming gaining more and more global recognition by the day, we’re sure figures such as these are only to facilitate its popularity in Asian markets.

Although something that might not be so good for Macau’s gambling industry is news that inflation in the city is on the rise. Increasing by 6.8% in January compared with the same month last year – this is the highest it has been since November 2008, Macau Business reports.

Figures from Macau’s Statistics and Census Service show that the increase was mainly attributable to meals bought away from home and outbound package tours. The casino industry is booming in Macau at the moment, as we see regular figure that demonstrate substantial growth. But as inflation rises, so does general living costs meaning there is less activity in the economy. Could this have a negative affect on the gambling industry?