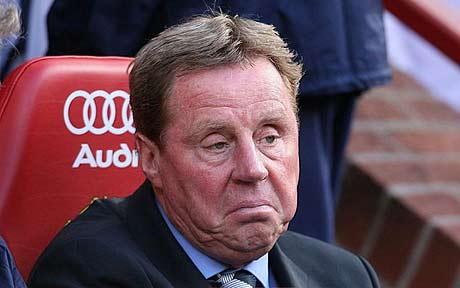 England’s legion of sportsbooks are split on whether they want overwhelming favorite Harry Redknapp to go ahead and take the national team job. Ever since Fabio Capello disagreed with the FA on the John Terry issue and resigned there has only been one name on the lips of fans, players, managers and the media the entire universe. Even if ‘arry does wheel and deal his way to the FA’s ivory towers, it’s questionable as to whether he’ll be able to turn around the fortunes of a team full of controversial characters.

As far as the bookies are concerned there’s a split. Sky Bet’s Helen Jacob told us Redknapp getting the job would be “a great results” as his short price has forced punters to look at candidates at much longer odds. Garry McGibbon, spokesperson for Stan James, was of much the same opinion and said: “Redknapp is actually a small winner for us, presumably because he is such a short and unattractive price at 2/9.”

The larger of the three sportsbooks we spoke to, William Hill, were less happy with the prospect of ‘arry getting the job. Graham Sharpe stated “anyone but ‘arry” would be a good result for them as 80% of the money staked on the next boss had gone on Redknapp.

Even though it may seem otherwise, the job is actually open to other men apart from football’s jowelliest man. A dozen are in the hat and seeing as Redknapp’s odds are so short a number have seen a fair bit of money staked.

The FA is thought to favor a British candidate and it’s something the punters are clinging onto. For this reason, and the fact that he’s the current caretaker, Stuart Pearce has seen heavy backing. Hills report the money staked on the Under-21 boss is third behind only ‘arry and Guus Hiddink with Sky Bet reporting their “worst results” would be either Pearce and Real Madrid boss Jose Mourinho. Stan James are looking favorably at a Pearce appointment but still only called it a “decent winner”. Their biggest loss would be if another Englishman got the job.

“Roy Hodgson is a giant loser for us having been backed at 20/1, but if he does get the job we’ll be shocked – he’s already managed 20 teams in his career and has only ever won trophies in Scandanavia. It’s hardly the CV of a world beater,” spokesperson Garry McGibbon admitted.

Although the media likes to make you think otherwise, the coronation of Redknapp will take place at the end of the seas at the earliest. That’s if it happens at all. His current employers far outstrip the FA in terms of potential success and if Spurs were to make the Champions League you wouldn’t blame ‘arry for turning down the FA. The bad news is some of the bookies will be in for a hiding should this take place.