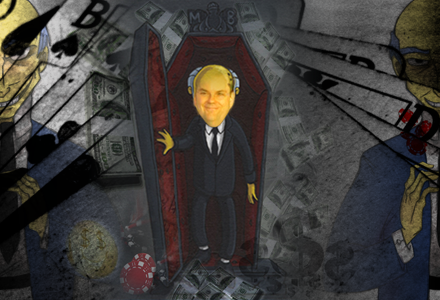 @PokerScout1: Apparently Bodog didn’t like us reporting that their traffic is dropping. Expect another truth-optional CA story in 3, 2, 1…

It shouldn’t surprise any of you that we’re not fans of Dan Stewart, his site PokerScout.com and their business model of exploiting poker operator’s data without permission for profit. This dislike existed even before his extortion attempt of our friends over at Bodog Poker.

Dan’s business model involves pilfering a poker operator’s proprietary data and profiting on it without permission. Even if he doesn’t have accurate data, he’ll still post and profit from the inaccurate and fictional numbers. Guys like this aren’t good for the gambling industry and as the largest gaming-industry news site, we have a responsibility to callout those we believe are hurting the industry we love.

Even though we’re not fans of Stewart, we want to present the facts, give you our opinions and we’ll offer the other side a chance to respond so our readers can form their own opinions.

I have a theory about Dan Stewart and his decision to post fabricated Bodog Data on his site. He’s feeling burnt that Bodog chose to make the technical steps to effectively block site scrapers from stealing their data rather than pay him the extortion money to take Bodog off his site. Rather than admit that his numbers are a complete fabrication, he’s keeping Bodog on the list and slowing lowering their numbers to make it appear organic, rather than just do the right thing and admit he can’t track Bodog pokers site data.

I could be wrong. Perhaps he’s employing Miss Cleo or the Amazing Kreskin to come up with his data; it’s possible they help him pull numbers out of thin air. The only response we got from Dan was the tweet posted at the top of the page. We’re not surprised he didn’t want to answer our request from comments as if he answered truthfully it would have further damaged his credibility.

We want to hear from him but if he won’t answer privately, we’ll dedicate some electronic ink to asking him again, this time publically.

Below is a copy of what we sent to Dan. We don’t expect PokerScout.com to answer our questions but we hope more people will ask questions of Dan Stewart and the fictional numbers that propagate his site.

I noticed your weekly traffic numbers article this week. You made mention of Bodog dropping 9.5% and referenced a few articles from 2+2 posters as the reason. I thought what perfect timing as I am writing a follow up on your refusal to remove Bodog from your rankings and I wanted to see how you still managed to conjure numbers considering you have admitted you have no access to data to predict a gain or a loss in traffic. http://www.pokerscout.com/news/weekly-traffic-update.aspx?year=2011&week=51

Now that Bodog has blocked data from data scraping sites such as yours, you must be using a cup of goat bones tossed on the floor or something to get these numbers. Can you outline exactly what you are doing for these numbers? I contacted Bodog after looking at what you are publishing and they showed me actual numbers on the condition I not publish them…just as a reference for this article. As we both know, your numbers and the actuals are on different planets.

Basically, my biggest question is do you think pretending you have real numbers when you know they are pretend is ethical? Is selling this fake data as real, a form of consumer fraud or do you think this is just a bit of wink-wink, I had my fingers crossed so it’s not a lie kind of thing?

You have affiliate deals with the top sites on your rankings, considering some of the numbers on your site are fabrications do you let the fact that you’re earning cash from iPoker, Bwin.party, Stars and others influence your rankings?

How would it affect your affiliate business if you honoured requests from poker operators to stop using their data for your site?

Do you think it would hurt your credibility further if you were only left with sites in which you had an affiliate deal with and were earning cash from?

Lastly, do you think that your business model of selling fake data as real is a sustainable business model or are you just trying to coin it as long as you can until the entire model blows up on you?”