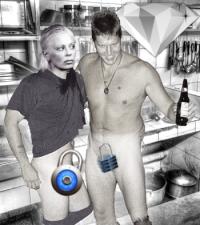 Jennifer Larson and Bryce Geoffrey in the Lock Poker Boardroom

We’re hearing that the US Attorney General’s office in Maryland is pissed at the boys in New York for stealing their thunder. Black Friday trumped Blue Monday and now Assistant US Attorney Richard Kay is digging for anything to steal some of the shine back from the New York office.

It’s confusing is why the DoJ would be targeting a micro site like, US facing, Lock Poker. Lock is something like the mouse that roars though. US facing Lock, run by Canadian ex-roommates Jennifer Larson and Canadian lawyer Bryce Geoffrey  is well known for releasing a lot of media, most of it considered ridiculous by knowledgeable industry observers but the noise factor is there.

Also their small advertising budget is used to get them prominent placement on a few sites that its well know to be regularly monitored by the US government to track US facing online gaming. The most recent example of this is the Covers.com/BetED player deposit theft scandal, where micro-site BetED (beneficially owned by Covers but not disclosed to covers.com site traffic) was targeted by the DoJ. Covers had their micro-site BetED ranked as the number one site in the US for two years running before the hammer dropped. This case is still winding its way through the US legal system and we have more coverage planned as it develops. Our biggest issue with this case is that we believe the owners of Covers have all the BetED player balances and are pretending the US government grabbed the cash.

This story is still developing and we’ll give you more details as we have them but our sources are strong.