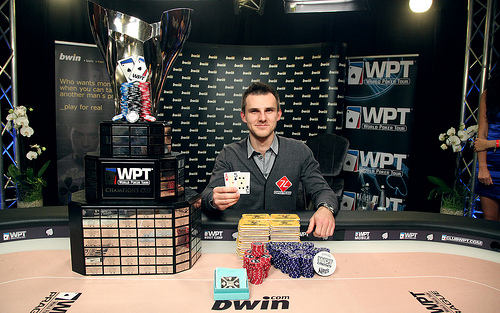 Andrey Pateychuk added the second cog of poker’s Triple Crown taking down the World Poker Tour’s latest stop in Prague. The Russian carried on his whirlwind year by adding to his title at EPT San Remo back in October and 15th place at this year’s World Series of Poker Main Event and taking home the €468,200 bounty. Pateychuk started the day back in third with chip leader Stanislav Kretz outnumbering him almost 3:1. Then the in-form player got to work.  He eliminated Sigurd Eskelund in fifth place and must have wished that with it had come the Norwegian’s WSOP bracelet! Pateychuk’s second elimination was the leader going into the day, Kretz, before the heads up with Adria Balaguer finished off a mammoth 10-hour session of tournament poker. The result gives Pateychuk earnings of over $1,000,000 this year and he only needs a WSOP title to become one of the grand daddy’s of the live game.

In the same city, the European Poker Tour’s latest stop started out with 234 duking it out at Prague’s Hilton hotel. 133 will return for day 2 and heading the chip count with a slender lead is another Russian, Vedzizhev Beslan. It’s very early days and with day 1b still to be played being knocked off the top without playing a hand is a real possibility.

On the other side of the world, the tournament that the Philippines’ favorite son lent his name to has entered its final chapter with the last 10 players all set to face off. Australian Oliver Speidel leads the Manny Pacquiao World Poker Event (accredited by Asian Poker Tour) after the 57 players at the start of the day were shaved down to the final ten in what felt like a similar time frame to a Pac-Man right-left combo. Speidel’s lead is a narrow one, his stack of 480,000 closely pursued by South African Conrad Coetzer (322,000) and Aldrin Edoc (268,000), who is the highest-placed Filipino in the field.

Russia’s day of domination was complete when PokerStars announced one of their number had taken down the 10th Anniversary World Record Tournament. sokoluk1991 bested the world’s largest ever field eventually taking home $40,258.83 as part of a three-way deal with Kaitz from Estonia ($34,000) and King-2-Z from the UK ($25,741.17).