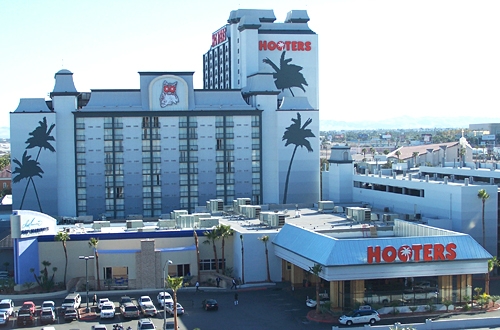 The Las Vegas hotel-casino renowned for its boobs-on-skates – Hooters – is to be auctioned off in a bankruptcy sale.

The 696-room property on Tropicana Avenue, just east of the Las Vegas Strip, has proved to be lacking some hoot as of late, and under a deal disclosed yesterday in U.S. Bankruptcy Court will be auctioned by some time before 17 February.

It was filed for Chapter 11 bankruptcy reorganisation and protection on 1 August. But according to VegasInc, the bankruptcy was filed to block a foreclosure threatened by Canpartners Realty Holding Company (holder of $178 million of Hooters’ $181 million face value in debt). Canpartners and Hooters have been scratching one another’s eyes out ever since. In the cat fight, Canpartners said the bankruptcy is a “waste of time and money” because it believes Hooters is worth no more than $80 million. It said that it’s so far behind on its mortgage that reorganisation efforts would be “hopeless”. Meow. Hooters hit back saying there should be nothing stopping it “reorganising its debts” and seeking equity capital.

However, in Vegas Inc’s report, the hearing on Monday saw Hooters attorney Gerald Gordon of the Las Vegas law firm, Gordon Silver, tell Judge Bruce Markell that Hooters and Canpartners have now made an agreement, leading to the arrangement of the February auction date.

The agreement also states that Canpartners can’t object to Hooters’ request to propose a plan of “reorganisation by extended indefinitely” from the date of the deal.

The court hasn’t yet finalised the sales process or actual auction date for the hotel-casino, which Hooters put $130 million into renovating before it opened in February 2006.