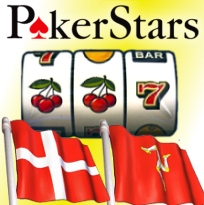 PokerStars has chosen Italy as the jurisdiction from which it launches its debut mobile poker client. eGamingReview reports that the (initially) play-money-only app was made available Tuesday on the Italian iTunes site, and offers multiplayer, cash and tournament options in English, French, Russian, Spanish, German and, er, Italian. However, in order to access the app, you need to hold a valid Italian mailing address and a PokerStars.it account. In late 2009, PokerStars acquired mobile developer Cecure Gaming, so Tuesday’s release would mark the culmination of two years of preparation.

PokerStars holds a gaming license issued by the Isle of Man, whose Gambling Supervision Commission has just announced a bilateral cooperation agreement with the Danish Gambling Authority. The deal will establish a formal basis for cooperation and info sharing between the two regulators, and is to be formalized once the Danish Gaming Act takes effect on Jan. 1, 2012. The agreement follows a similar deal in July between the Danes and the Alderney Gambling Control Commission.

Czech Republic politicians are furiously backpedaling after the lower house of parliament ‘mistakenly’ passed legislation this month that handed video lottery terminal (VLT) operators a CZK 2b (€77.7m) tax break. The Chamber of Deputies surprised the government by voting for a bill that called for a 20% tax on VLT revenue to be split into three parts: one third going to local municipalities, another third to education, while the final third was left up to the gambling companies to donate to a charity of their own choosing. (The government had sought to split the revenue evenly between municipalities and education.) Even more controversially, the deputies removed wording in the bill that levied taxes on individual machines, leaving operators responsible for paying tax only on each central server (to which hundreds of VLTs may be connected). However, the ensuing media firestorm – in which it was suggested that VLT operators had said ‘jump’ and spineless politicians had asked ‘how high’ – means the government is now hoping to make amendments (and amends) in the Senate by January.