On Thursday, the Senate Indian Affairs Committee held its “What’s At Stake for Tribes” hearing on a future regulated US online poker market. Committee Chairman Daniel Akaka (D-HI) was on hand, along with vice-chair John Barrasso (R-NY) and members Al Franken (D-MN) and Tom Udall (D-NM). None of the other five Republican senators evidently made an appearance; five other Democrats were similarly absent.

The first panelist addressing the Committee was Larry S. Roberts, general counsel of the National Indian Gaming Commission (NIGC). Roberts was something of a dud, as his standard response to virtually any question put to him was that, as none of the online poker bills currently before Congress stipulated any regulatory role for the NIGC, it was not Roberts’ place to comment on them. So he didn’t. Up next was the Mohegan tribe chairman Bruce “Two Dogs” Bozsum (wearing a bolo tie so massive we predict his next fashion accessory will be a neck brace). Bozsum maintained that the NIGC was the sole federal agency with any experience regulating gambling nationwide, making it better equipped than regulatory bodies at the state level to deal with online poker. Queried by Akaka as to whether tribes should be allowed to act as both regulator and operator of an online poker site, Bozsum pointed out that tribes were already acting in such a dual capacity via their brick and mortar casinos. However, Bozsum said he would support a federal standard for minimum internal controls.

Asked whether he favored a state or federal online poker system, Bozsum said that he preferred the simplicity of a federal solution, but that “as a businessman,” he was prepared for either scenario. (Bozsum’s advocacy for a poker-only system in “Phase 1” suggests he’s similarly preparing for Phase 2.) Regardless of where the negotiations take place, Bozsum emphasized that tribes must be given a voice. “If you’re not at the table for dinner, you will be dinner at some point.” Bozsum therefore urged the Committee not to give a “headstart for Nevada or New Jersey” and to “reject any provisions that use concocted formulas or restrictions under various guises of consumer protection … to delay or exclude tribes entirely from competing in the internet gaming market.”

Next up was Glen Gobin, vice-chair of Washington state’s Tulalip tribe. Gobin described online poker as a “direct threat” to tribal economies that his tribe couldn’t support. Gobin questioned how many tribes would be able to make a go of things online, pointing out that there is “no name recognition” of the Tulalip compared to someone like Harrah’s (Caesars). However, while Gobin wouldn’t give online poker his blessing, he maintained that should such legislation prove unstoppable, tribes needed to be consulted. He especially didn’t want to see legislation passing via a “midnight rider” à la UIGEA. 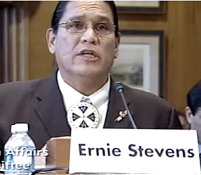 The National Indian Gaming Association’s (NIGA) Ernie Stevens (who appeared at the House of Representatives online poker hearing in October) restated his opposition to the pending poker bills for their violations of state-tribal compacts and the Indian Gaming Regulatory Act (IGRA). NIGA exec. director Mark Van Norman stressed that whatever the tribal role in online poker, tribes should not be subject to federal or state taxation, under the principle that “governments do not tax governments.” A regulatory fee was okay, but since tribal gaming revenues are used to provide infrastructure and services on tribal lands, they are already taxed by tribal governments at a 100% rate. 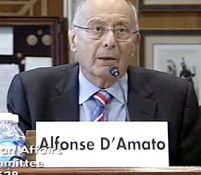 Like Stevens, the Poker Players Alliance’s Alfonse D’Amato also made a repeat appearance. D’Amato dismissed tribal concerns about ensuring a level playing field with commercial gaming outfits, suggesting that if the Mohegans teamed up with (for example) the Oneidas, they could compete with anyone. D’Amato also rubbished the notion that online poker would cannibalize B&M casino revenues, pointing out that poker traditionally amounted to just 1% of total B&M revenue. D’Amato suggested the real threat to tribal casinos was from state lotteries looking to offer “scratch cards” online, which D’Amato said were comparable to slot machines – from which B&M casinos derive the bulk of their revenues.

Penny Coleman of Coleman Indian Law (and the NIGC’s former general counsel) also advised that the NIGC be given the lead role in regulating online poker, suggesting it would take the Commerce department “years” to put systems in place and gain the experience the NIGC already possessed in abundance. Grant Eve of accountants/consultants Joseph Eve warned the Committee that he didn’t put much stock into the lofty tax revenue projections floated by online poker advocates, a point on which D’Amato concurred.

In closing, Chairman Akaka noted that the hearing had only just scratched the surface of what was a very complex issue, and promised to convene additional meetings down the road to hear from all interested parties.